Posted on January 29, 2017 by reallifepastor

So.  Some things happened this week.  Lots of things.  Are you wondering how to follow Jesus in the new circumstances in which we find ourselves in our country?  I sure am.

Some folks throughout history have found the Sermon on the Mount to be a helpful handbook for following Jesus in troubling times.  Mahatma Gandhi read it every day.  Dietrich Bonhoeffer’s best-known book, The Cost of Discipleship, is an extended essay on it.  It guided Martin Luther King, Jr., as well.  If the Sermon on the Mount guided Gandhi in addressing the injustices caused by colonialization, Bonhoeffer in confronting the Nazi regime in World War II, and Martin Luther King, Jr., in transforming the Jim Crow South, perhaps it also can guide us as we seek to follow Jesus in the new reality in which we find ourselves.

First century Palestine was occupied by an oppressive Roman regime.  Race prejudice was prevalent.  The steep taxes paid to the occupying government were so high, many people struggled to buy food and basic necessities.  The gap between rich and poor had widened to the point that there was no middle class.  For those living on the margins, life was grim.

What were they to do?  Some said the best way to survive was simply to go along and not complain.  Others–the Zealots–advocated overthrowing the government.  Religious leaders, like the Saducees, compromised.  If you can’t change things, they figured, use the system to your advantage.  The Pharisees cast their lot with God.  They thought that if you just followed God’s law, God would reward you.  (Clarence Jordan, The Sermon on the Mount)

Jesus offered a different way, a way summed up in a one-line sermon:  “Repent, for the kindom of heaven has come near.”

Repent.  Now, there’s a scary word.  Clarence Jordan, founder of Koinonia, says in his commentary on the Sermon on the Mount that when Jesus “called on people to repent, he demanded that they change their way of thinking, abandon their false concepts, forsake their wrong methods, and enter upon a new way of life.”  “Forsaking the wrong way,” he said, “is only half of repentance; accepting the right way is the other half.”  (13)

What is the right way?  The right way is whatever leads to the kindom of heaven…which, for the longest time, I assumed was where you go after you die…pearly gates, streets of gold, harp-playing angels, and all that…

But as we spend time with the Sermon on the Mount this year, you’ll see that Jesus wasn’t nearly as concerned about what happens after death as he was with what happens before it.  Jesus cared deeply about the circumstances in which people were living.

For Jesus, the kindom of heaven is in the here and now, at least to the extent to which we work with God to create it.  In fact, that’s the whole point of following Jesus—doing what we can to help create the world God envisions.  “Thy kindom come, thy will be done on earth as it is in heaven,” right?

How do we repent and create the kindom of heaven?  What will inspire us to “change our thinking, abandon false concepts, forsake wrong methods, and enter upon a new way of life?”

Jesus’ method was to turn everything on its head.  Reading the Gospels is like taking a stroll through Opposite Land.  Jesus seems intent every step of the way on upending assumptions about how to get along in the world.  He preached mainly to the poor—society’s least powerful people—and called on them to turn the world upside down.  No wonder he got killed.

“Repent, for the kindom of heaven has come near!”  Man, I’d love to preach one sentence sermons…but I’m not sure I could.  And if I did, I’m not sure anybody would understand them.

I suspect the same was true for Jesus.  He probably had all kinds of folks asking after hearing his one-line sermon asking, “Um, Jesus?  I don’t get it.”  His response is the Sermon on the Mount, an extended explanation of “Repent, for the kindom of heaven has come near.”

So, if you’re preaching a sermon that’s going to inspire people to turn the world upside down, you’ll need to start with something that will grab their attention, something catchy, something shocking.  That’s why Jesus starts the Sermon on the Mount with the Beatitudes.

In 1991, author Phillip Yancey was preparing to teach a Sunday school lesson on the Beatitudes.  His prep work involved searching for film clips of Jesus speaking the Beatitudes.

This was in ancient times, before Netflix streaming—so, Yancey was searching for scenes on VCR tapes.  While fast-forwarding or rewinding, he’d flip to CNN.  It was January 1991 and in a press conference, General Norman Schwartzkopf was explaining how the American military had defeated the Iraqi forces in the first Gulf War in just five short days.

Yancey flipped back and forth between Jesus movies and the news conference until he abandoned the VCR altogether– “Stormin’ Norman proved entirely too engaging,” Yancey said.  “He told of the ” end run” around Iraq’ s elite Republican Guard, of a decoy invasion by sea, of the allied capability of marching all the way to Baghdad unopposed… Confident in his mission and proud of the soldiers who had carried it out, Schwarzkopf gave a bravura performance.”  Yancey remembers thinking, “That’s exactly the person you want to lead a war.”

When the briefing ended, Yancey went back to the Jesus movies.  As he watched Max von Sydow’s Jesus slowly recite the Sermon on the Mount in The Greatest Story Ever Told, then compared it to General Schwarzkopf’s briefing, he was struck by the irony that, in Stormin’ Norman’s briefing, he’d been watching the Beatitudes in reverse.

“The bizarre juxtaposition of the two speeches gave Yancey a feeling for the shock waves the Sermon on the Mount must have caused among its original audience, Jews in first-century Palestine.  Instead of General Schwarzkopf, they had Jesus, and to a downtrodden people yearning for emancipation from Roman rule, Jesus gave startling and unwelcome advice.  If an enemy soldier slaps you, turn the other cheek.  Rejoice in persecution.  Be grateful for your poverty.  The Iraqis, chastened on the battlefield, got revenge by setting fire to Kuwait’s oil fields; Jesus enjoined not revenge but love for one’s enemies.  How long could a kingdom founded on such principles survive against Rome?”  (The Jesus I Never Knew)

Last week, one of our young people told us what a thrill it was to shake the hand of U.S. Representative John Lewis.  I’ve just finished reading the first volume of the comic book version of Lewis’ life called March.  In it, he says that from the age of 4, he felt called to preach.  Though his life took a different turn, his love for his Christian faith and commitment to living that faith in public still guides everything he does.

One of the things Lewis talks about in March is his love of chickens.  At home on the farm in Alabama, it was Lewis’ job to care for the chickens.  He fed them, tended them…and preached to them.  Nearly every night, he’d gather the chickens into the henhouse, settle them on their roosts, and “lay” a sermon on them.  “They would sit quietly,” he said. “They would bow their heads.  They would shake their heads.  But they would never quite say ‘Amen.’”

In the book, amid pictures of chickens on their roosts, conversation bubbles contain one of Lewis’ sermons:  The Beatitudes.  “Blessed are the meek, the merciful, the pure in heart.”

When I read the last two bubbles:  “Blessed are they who are persecuted for righteousness’ sake, for theirs is the kindom of heaven,” another picture flashed in my mind — a picture of Lewis lying on the ground near the Edmund Pettis Bridge in Selma, Alabama.  It was March 7, 1965, the day the people’s march to Montgomery for voting rights was stopped nearly before it began.  In the ensuing chaos, Lewis’ skull was fractured in a beating. 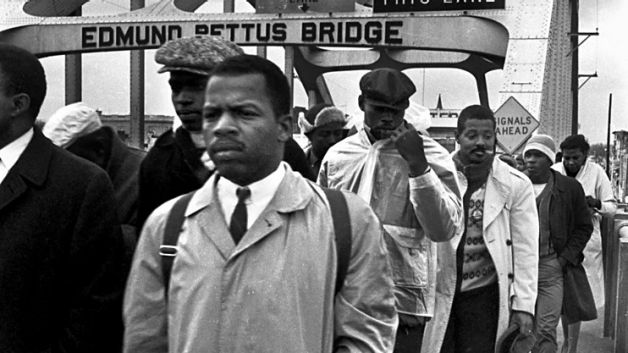 In another section of the book, Lewis talks about the extensive training in nonviolent resistance he and many others received.  In the sessions, they’d role-play scenes, like enduring abuse while sitting at lunch counters.  A key part of the training was that everyone would play every role…which meant that every person played protester, witness, and attacker.

The most difficult role for any of them to play was attacker.  Can you imagine being a person committed to love and justice having to spew hatred at people who were your friends…to shove them and spit at them and pour things on them?  Some people couldn’t take it and left.

The training sessions helped the protesters learn how to protect themselves, how to disarm their attackers by connecting with their humanity, how to protect each other, how to survive.  “But the hardest part to learn,” Lewis writes, “the hardest part to truly understand, deep in your heart, was how to find love for your attacker.”  “Do not let them shake your faith in nonviolence,” they were told.  “Love them!”

“Blessed are they who are persecuted for righteousness’ sake, for theirs is the kindom of heaven.”  John Lewis found it, he found the kindom of heaven.  He found it by putting his body on the line for the sake of justice.  He did it by standing up for what is morally right in the face of laws that were morally wrong.   He did it by becoming a part of the solution.  And he did it all, every last bit of it, as a disciple of Jesus.