Posted on March 3, 2019 by reallifepastor

Here’s what bugs me about this story.  It’s not the odd appearance of Moses and Elijah  with Jesus on the mountain.  And I’m not bugged by Peter’s ebullient outburst; that’s just who Peter was.  I’m not bugged by the reprise of Jesus’ baptism blessing: “This is my child, the beloved, with him I am well-pleased.”  And I like the addition of “Listen to him!”

What bugs me about this story is what happens after Jesus, Peter, James, and John come down from the mountain. When they reach the bottom, they’re met by a man who implores Jesus to heal the man’s only son, who is beset by seizures.  “I begged your disciples to cast out the demon, but they could not.”

What bugs me is how Jesus responds to the man’s request.  “You faithless and perverse generation, how much longer must I be with you and bear with you?”  I’m going to go out on a limb here and say that’s probably not what God had in mind when God told Peter, James, and John to, “Listen to him!”  I know he’s Jesus and all, but man!  That’s cold!  Seems like when you’ve experienced the mountaintop, when you’ve had visions and have heard God speak… I don’t know.  Seems like you’d be in a better mood, doesn’t it?  Why is Jesus so grumpy?

Maybe it will help to look at what’s happened leading up to this moment.

After preaching his first sermon in his hometown—He didn’t get killed, so we’re going to call it a win.  After that, Jesus starts collecting disciples.  They go out teaching and preaching and healing.  There’s an encounter here or there with the religious authorities that foreshadows what’s to come (cue ominous music), but mostly it’s typical Messiah stuff.

By the time we get to chapter 9, Jesus’ ministry is going so well, he sends the twelve out on their own to cast out demons, cure diseases, and preach the kindom of God.

In the meantime (cue ominous music) Herod, the Jewish tetrarch, starts getting nervous.  With all the teaching, preaching, and healing he and his disciples have been doing, Jesus has amassed quite a following…and by “quite,” I mean bigger than Herod’s.

After the disciples return from their outing and report their success, they and Jesus try to retreat to a small village, but the crowds find them.  So, Jesus teaches.  He goes on so long, the people get hungry.  In true Messiah fashion, Jesus feeds all of them.  And has leftovers.

In response to Peter’s declaration, Jesus predicts his own death.  “The One of Humanity must undergo great suffering, and be rejected by the elders, chief priests, and scribes, and be killed, on the third day be raised.”  (Cue ominous music.)

It’s after this that Jesus takes Peter, James, and John up the mountain.  Then all the lights, visions, and voices happen.  Then they come back down the mountain.  That’s when Jesus turns into a grump, when he calls his disciples a “faithless and perverse generation,” when he wonders aloud how much longer he must be with them and bear with them.

So…maybe Jesus is getting worried about what he senses will happen soon…by which I mean getting killed.  That’d make anybody grumpy.  Or maybe he was full of all that glory from his mountaintop experience and was annoyed that he had to quit basking and get back to work.

Or…maybe Jesus was getting nervous about whether or not the disciples would be able to keep on with the work of the kindom after he was gone. A short time before when he’d sent them out, the disciples had healed, cured, and preached to beat the band!  Maybe Jesus had interpreted their success to mean his work with them was done, that they’d learned all their lessons, that they now were ready to continue sharing the message of God’s love after Jesus’ departure.  But now?  Sigh.  It was back to the drawing board.

So what happened?  How did the disciples lose their Gospel mojo?

Here’s what I wonder–and y’all, don’t look for this interpretation in any commentary.  This is just me.  But I wonder if the disciples lost their momentum, if they lost their Gospel mojo because Jesus didn’t take all of them up the mountain.  Maybe the disciples down below lost confidence when they’d been excluded from the inner circle.  And maybe the three Jesus had taken up the mountain started thinking they were all that, that they were better than the “less worthy” people who’d been left down below.

In a class I TA’d at Candler School of Theology in the 90s, a student led a Bible lesson on righteousness.  She had outlined three concentric circles on the floor in masking tape and placed a lit candle in the center.  Then she invited us to arrange ourselves on the circles based on how righteous we were feeling that day.  The righteous-feeling people stood on the tape closest to the center.  The sort-of righteous feeling stood on the middle circle.  Even before she said it, I headed to the outermost circle.  A couple more brave unrighteous souls joined me.

As you might guess, the inner circle was crowded.  The middle circle also had a lot.  The couple of us on the outside…felt like we were on the outside.  After we’d settled in, one of my fellow unrighteous folks said, “I can’t see the light for all those righteous people!”  We, who most needed to see the light that day, couldn’t see it for all those righteous people. 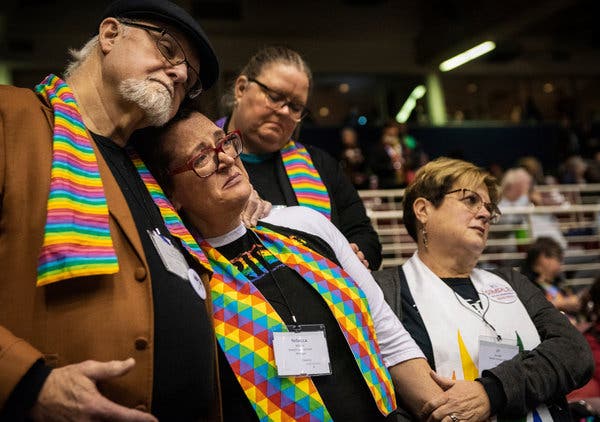 Have you figured out that I’m talking about the Methodists?  The United Methodists’ decision this week to double down on restrictions to folks who are LGBTQ has hit many of us in the gut.  Some of you are former Methodists.  Even if your membership is in this UCC congregation, I know that many of you are still Methodist in your hearts.  I experienced exclusion in my life as a Southern Baptist, but the deepest part of my heart is still Baptist.  It’s hard to explain.  The fact that denominations exclude doesn’t instantly erase all the ways those denominations have loved us and formed us…

The short answer to these questions is a logistical one.  Many delegates to last week’s conference come from countries where homosexuality is a crime.  In some countries it’s a capital crime.  As clergy who have to return to those countries, it could be that some of those delegates felt they had no choice but to double down on exclusion.  There is speculation that if the vote had been taken with just American churches, the church’s doors would have been opened both to gay weddings and to ordination of LGBTQ clergy.

But that’s not what happened.  And now people are hurting, people are angry, and a church, likely, is splitting.  I don’t know about you, but my heart is breaking.

But here’s what I want to say today—broken hearts heal.  Twenty years ago, the church on whose staff Allen and I served, was disfellowshipped by the Georgia Baptist Convention for welcoming people of all sexualities.  I can honestly say I’ve never been as frightened for my physical safety as I was that day in Macon’s convention center.  Mob mentality is ugly.  And terrifying.  We were devastated by the experience.

But working through the pain and trauma of it has taught me a lot.  Perhaps the most important lesson I’ve learned is that institutional church isn’t the same thing as the body of Christ.  All human institutions are flawed.  The ideal of community among Jesus’ followers, the power of community to act the world into wellbeing, the unshakable reality of God’s radically inclusive love….denominations may come and go, but the good news of God’s love remains.  As long as we continue living what Jesus taught, God’s hopes for the world will come true.  The disciples might have gotten it wrong that one day, but they must have gotten something right eventually, right?  We’re here, aren’t we?