Twenty years ago today, I was ordained by Virginia-Highland Baptist Church in Atlanta, Georgia.  As a Southern Baptist girl and woman, the journey to ordination was arduous. In 1988, I went to seminary to become a children’s minister…because that’s all I’d seen women do in church.  By the time I graduated, I had embraced my calling to pastoral ministry. But in 1992, the SBC was taking yet another hard right turn. Finding a church to pastor wasn’t an option.

I entered the PhD program at Emory University.  A year after I moved to Atlanta, the saint of a man who would become my husband, Allen Mullinax, moved down.  He became the Minister of Music at Virginia-Highland. After we married in 1995, I began attending Virginia-Highland, as well. 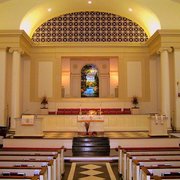 At that point, the congregation was small…but, oh, how they loved me!  And helped me to affirm my gifts for ministry and my call to pastor. I will forever be grateful to Rev. Tim Shirley, who gave me numerous opportunities to “practice” ministry.  And I’ll always be grateful to Virginia-Highland for ordaining me.

In 20 years of ministry, I’ve been blessed to serve three congregations.  I served a year and a half at Virginia-Highland as its Associate Minister for Christian Nurture.  It was part time, but very fulfilling. It’s also the first time Allen and I served on church staff together, which was a joy.

In 2001, I was called to my first full-time pastorate, Pilgrimage UCC in Marietta, Georgia.  In so many ways, I became a pastor at Pilgrimage.  I learned so much from those good and loving people!  And for 11 of the 16 years I served there, Allen and I worked together…which was another deep joy.

As I reflect on my time at Pilgrimage, two things stand out.  First, I learned a lot about what it means to navigate the world as a transgender person.  I’ll always be grateful to the members who shared their lives with me and with our congregation and taught us so much.  The second big thing I learned–was just how beautiful and inspiring stained glass windows can be.

I moved to my current call a year and a half ago.  When I came to First Congregational UCC in Asheville, NC, I thought I’d learned all there was to learn in my 18 and a half years of ordained ministry.  I know now that I was just getting started! The generosity of the folks at FCUCC, the creativity, the support, the strong commitment to social justice and peacemaking…I am growing as a pastor in my work at First…we are growing together as a congregation.  I am DEEPLY blessed.

On this 20th anniversary of my ordination, I am awash in gratitude.  What grace! What love! What joy!