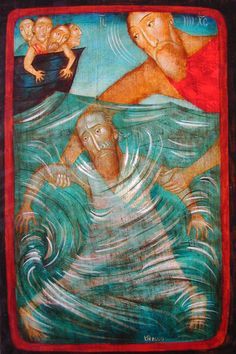 “You of little faith, why did you doubt?”  That’s what Jesus says to Peter as he hauls him out of the sea during a raging storm.  This, after Peter asked to walk on water, stepped out of the boat, and actually did it.  When his faith faltered, Jesus could have said something like, “Good job, Peter!  That big gust of wind unnerved you a little, but until then?  Man, you were rocking it!”  Instead, Jesus questions Peter’s faith.  “You of little faith, why did you doubt?”

Do you like this story?  I’m not a fan.  Faith is hard enough as it is.  Ragging on people because they don’t believe every second of every day… Maybe hearing this story is hard because I suspect my response in the same circumstances would have been similar to Peter’s.  Nobody wants to hear Jesus ask them, “You of little faith, why did you doubt?”

Today’s story begins with Jesus sending the disciples away, then heading up a mountainside by himself to pray.  He did the same thing at the beginning of last week’s story about feeding the 5,000…well, he went out in a boat that time, but still, he was seeking solitude.

Why the sudden need for private reflection?

Earlier, Matthew tells us the impetus for Jesus’ sudden search for solitude was the execution of John the Baptist.  As soon as Jesus learns of John’s death, he goes out in a boat by himself.  The crowds come, he teaches them, feeds them, then, the minute they go home, he scurries up the mountain for more private prayer.

What was it about John’s death that propelled Jesus into all this reflection and prayer?  What was he working out?  And how might it relate to his encounter with Peter?

A lot of the relationship between Jesus and John in the Gospel of Matthew has to do with identity.  John is clear from the get-go that he is not the promised one, but the announcer of the promised one, like the prophets of old.  When Jesus comes to John for baptism, John demurs, saying he’s the one who needs to be baptized by Jesus.  Then he relents and baptizes Jesus.

After his baptism, God’s Spirit drives Jesus into the wilderness.  Each temptation Jesus experiences in the wilderness helps him get clearer about his identity as Messiah.  He’s not a showman.  He’s not ruler of the world.  He’s not bigger than God.  He is God’s Messiah, the one through whom people will come to know the kindom of God.

By the time Jesus emerges from the wilderness 40 days later, John is in prison.  John’s imprisonment is the impetus for Jesus to begin his public ministry—“When he heard John had been put in prison,” we’re told, “Jesus moved to Galilee,” which became home base for his public ministry.  Jesus picks up where John left off, even preaching the same message, “Repent.  The kindom of heaven has come near.”

The narrative goes along at a good clip with Jesus preaching, teaching, and healing to beat the band until, boom.  He learns of John’s death.  To this point, Jesus’ identity has been explored in conversation with John the Baptist—from John’s insistence that he is not God’s Messiah, to confusion over who should baptize whom, to John’s imprisonment inaugurating Jesus’ ministry.

We don’t know for sure why Jesus needs all that alone time in Matthew 14, but it does make you wonder if John’s death sparked an identity crisis.  Who am I now?  What does it mean for me to be God’s Messiah now that John is gone?  Again, we don’t know for sure, but maybe all that reflecting did the trick.  Like his wilderness reflections after his baptism, maybe Jesus’ time in the boat and up the mountain helped him get clearer about his identity as God’s Messiah in a post-John the Baptist world.

If that’s the case, then the story of Peter walking on–and sinking into–the water isn’t so much about Peter’s lack of faith as it is about Jesus assessing how much work he has to do to convince others he is God’s Messiah.  If Peter is the one on whom Jesus has decided to build the church, if he is the one most deeply rooted in the faith, then as Jesus seeks to continue living into his calling as God’s Messiah post-John the Baptist, doesn’t it make sense that he would want to see where he stood with Peter, to this point, perhaps, the most faithful disciple?

Scripture doesn’t tell us anything about tone of voice when people speak.  In the original manuscripts, you don’t even get punctuation, lowercase letters, or spaces between words.  So, determining tone of voice is a matter of interpretation.

So, here’s what I wonder.  I wonder if Jesus’ statement to Peter isn’t so much a statement of judgment but an honest question.  “Is your faith so fragile?  Why are you doubting?  No, really.  I want to know.  Why has your faith in me faltered just when you need it most?”  To this point, John the Baptist had helped others to see Jesus as God’s Messiah.  But now John was gone; now, Jesus was going to have to do the work of showing himself to be God’s Messiah without him.  And if Peter—the most faithful disciple—could only see Jesus as Messiah up to the point at which things got scary…well, Jesus was going to need to figure out how to help people believe in him all the time, even the scary times.

We aren’t walking on—or sinking into—water this morning.  There is no violent wind blowing…but I suspect all of us are trying to make sense of what’s happened in Charlottesville, Virginia, the past couple of days.  We don’t live in Charlottesville, but images of what transpired there…that happened in our country.  Some of our fellow citizens are so filled with hatred and bigotry they’ve wrapped themselves in symbols and language of Nazism.  When rhetoric dehumanizes whole groups of people, physical violence is never far behind. 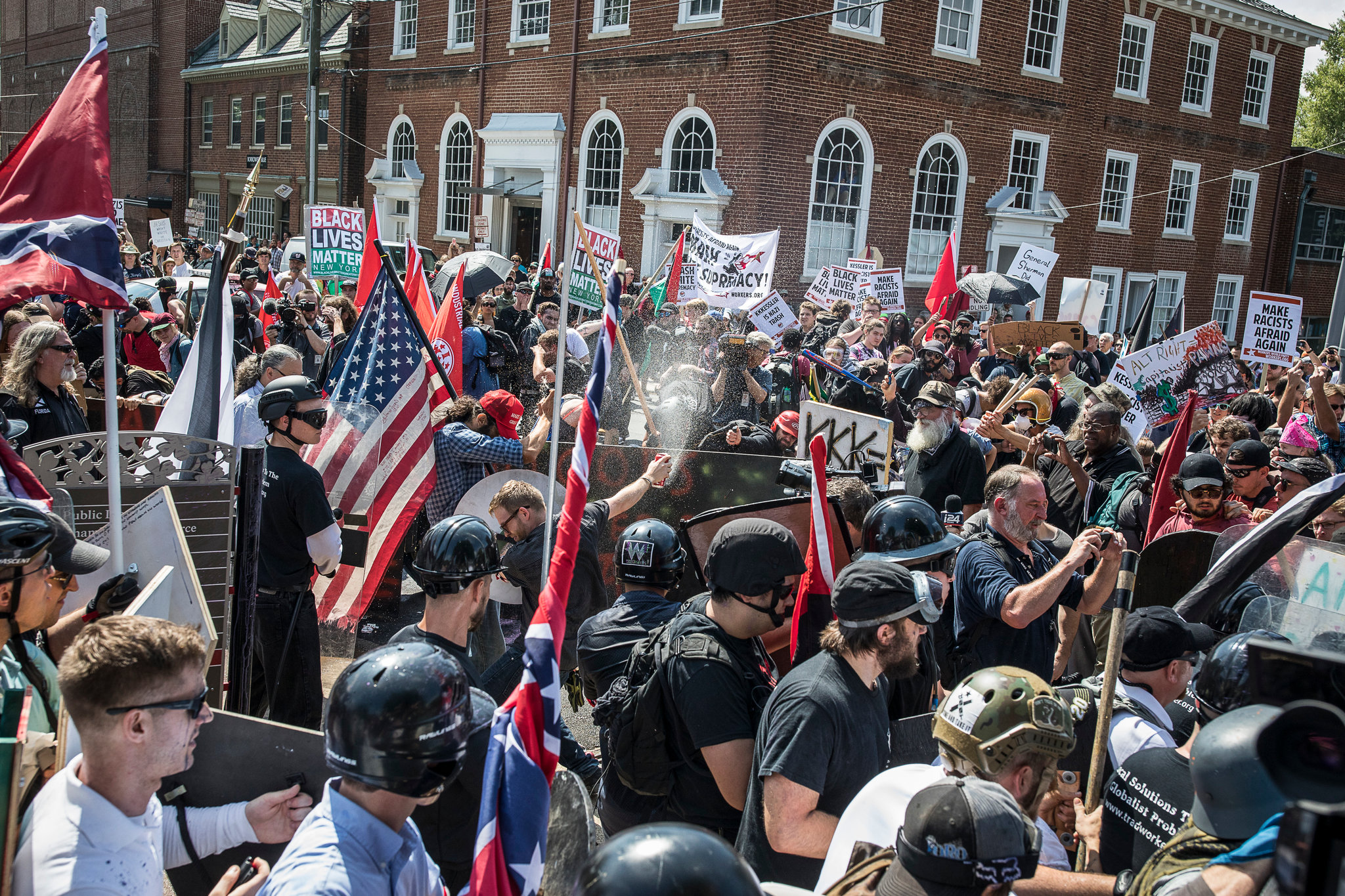 I’m not saying that only those on the alt right or neo-Nazi side engaged in violence yesterday.  In a riot situation, I’m sure things get very confusing very fast.  I do believe, though, that any philosophy, any language, that dehumanizes others is in itself violent.  Our thoughts matter…because our thoughts lead to words…our words matter because they lead to actions…

So…we’ve stepped out of the boat.  To this point, our faith has been strong enough to keep us afloat… but now this storm is raging.  What does believing in Jesus as God’s Messiah mean now as we try to make sense of the events in Charlottesville, which is just a microcosm of rampant racism throughout our country?

That means that when the storm rages, we love our neighbor…and our enemy.

When the storm rages, we pray for those who persecute us.

When the storm rages, we do not judge, lest we be judged.

When the storm rages, we tend to the log in our own eye before complaining about the speck in our neighbor’s eye.

When the storm rages, we do to others as we would have them do to us.

When the storm rages, we remember that peacemakers will be called children of God.

When the storm rages, we remember that mercy is granted to those who are merciful.

When the storm rages, we remember that it is the pure in heart who will see God.

When the storm rages, we pray God’s will be done on earth as it is in heaven.

When the storm rages, we remember that we are the salt of the earth.

When the storm rages, we remember that we are the light of the world.

When the storm rages, we turn the other cheek.

When the storm rages, we forgive as we are forgiven.

When the storm rages, we remember that every single person, every single human being is a beloved child of God, fully deserving of respect and dignity and freedom to live without fear.

When the storm rages, we act like the Charlottesville Chief of Police, Al Thomas.

he words he said at yesterday’s news conference were important and necessary.  He gave a rundown of what had transpired, how law enforcement had responded, the casualties incurred, and ongoing plans to keep the city safe.  His words very ably fulfilled his task as Chief of Police.

But his expressions…his voice…the long pauses…the dignity with which he carried himself…all spoke even more loudly a message we all need to hear—hatred has no place here.  A part of what it means to be Americans, to be human beings, is to treat each other with respect and dignity.  Lives should not have been lost here.  People should not have been hurt here.  Violence should not have happened here.

I don’t know if Chief Thomas is a follower of Jesus or if he’s even heard of the Sermon on the Mount…but from what I saw yesterday, he embodied perfectly what I think Jesus was trying to show us about God’s hopes for the world.  In the midst of the storm, Chief Thomas stayed true to what he knows is good and right and true.