Family.  Who’s in your family?  What makes them family?  How has family formed you? How does the family you are creating differ from the family in which you grew up?

Family is hard.  And beautiful.  And joyful.  And crazy-making.  And exasperating.  And at the heart of what it means to be human.  Families–for good AND for ill–make us who we are.

Anybody’s stomach in knots yet?  🙂  If you’ve ever struggled with family issues, you might at some time or other have taken comfort in today’s Gospel lesson.

Jesus, weary from a relentless schedule of teaching and healing, goes home to rest.  But even at home, in the tiny scrap of Sabbath he scratches out for himself, the crowds find him.  So many people gather, in fact, that Jesus and the disciples aren’t even able to eat a meal.

Hearing he’s back in town, Jesus’ blood family heads over to where he is to “take charge of him.”  Why?  “Because they thought he’d lost his mind.”  He’d been traveling throughout the region, saying things that didn’t sync with the rabbis’ teaching.  He spoke to demons.  He cast out demons.  He ate with people with whom the certifiably sane would never dine.  Acting in such a departure from the norm…he must be crazy, right?

What happens with those who are deemed “mentally ill?”  Best case scenario, those people’s families come and take them home.  Thinking him to be mentally ill, that’s what Jesus’ family does.  They come to fetch their loved one home.

When Jesus’ family arrives, they find him embroiled in a debate with religious scholars.  When the scholars say Jesus is possessed by a demon, Jesus questions their logic. How can a demon-possessed person cast out demons?  (That’d be like a government official pardoning himself, right?  Crazy!)  Jesus goes on to suggest that in confusing God’s goodness–which Jesus himself embodies–with the demonic, they are the ones who have committed blasphemy.

At its heart, the debate between the religious authorities and Jesus focuses on good and evil.  What is good?  What is evil?  Sometimes it’s hard to tell the difference, isn’t it?

It’s intriguing that Mark frames this debate about good and evil in the context of family.  On the surface, Jesus’ question “Who is my family?” sounds like a dismissal of blood families. But I suspect that, rather than disowning his own family, he’s inviting his hearers into a more expansive understanding of family.  Want to act the world into wellbeing?  Become part of Jesus’ true family, that collection of people who choose to live God’s love in the world.

Families.  We all have them.  Even when we have to disengage from them…still, those families are part of us.  Even if we give ourselves completely to the new kind of family Jesus invites us to create, we’ll never totally be rid of our family of origin.  It’s just not possible.

So, what of this new family Jesus proposes?  We just lived it out a few minutes ago when we baptized Finley.  When I made the transition from Baptist life to the UCC, the one thing I had to think through was infant baptism.  Baptists practice believer’s baptism, which occurs when a person makes a conscious decision to follow Jesus.  Babies are dedicated; they aren’t baptized.

Wondering if I could really do this UCC thing, I consulted the baptism liturgy we just used.  The congregational assent gave me pause.  Do you, who witness and celebrate this sacrament, promise your love, support, and care to the one about to be baptized, as he lives and grows in Christ?  You mean somebody else’s baptism creates a to-do list for me?  Promising love, support, AND care for the one being baptized?  AND helping parents nurture their children into Christian faith until they can claim the faith for their own?  It sounded like a lot of work.

It also made beautiful sense.  After all, Christianity is a communal faith.  It makes sense that one of our tasks as a community is nurturing the children in our midst into the faith we practice.  If we hope for the church to live on after we’re gone, we’re going to have to nurture the next generation into faith, right?  When I got that figured out, it clicked.  UCC!  UCC!  UCC!

Family.  There’s been a lot of talk of family in the news this week.  First, there was the Supreme Court’s Masterpiece decision…that wasn’t.  Maybe it’s true that the way the case was presented necessitated such a narrow ruling, and certainly curtailing one person’s rights to gain another’s isn’t a place we want to go, but…come on!  When are we, as a justice-loving country, going to make decisions that benefit ALL American families?  And when are Christians going to start acting like Jesus?

The other current news cycle that’s focused on family is the policy of separating children from their parents when they enter the country without documentation.  The New York Times this week reported the experiences of one of those children.

When he landed in Michigan in late May, all the weary little boy carried was a trash bag stuffed with dirty clothes from his dayslong trek across Mexico, and two small pieces of paper — one a stick-figure drawing of his family from Honduras, the other a sketch of his father, who had been arrested and led away after they arrived at the United States border in El Paso. 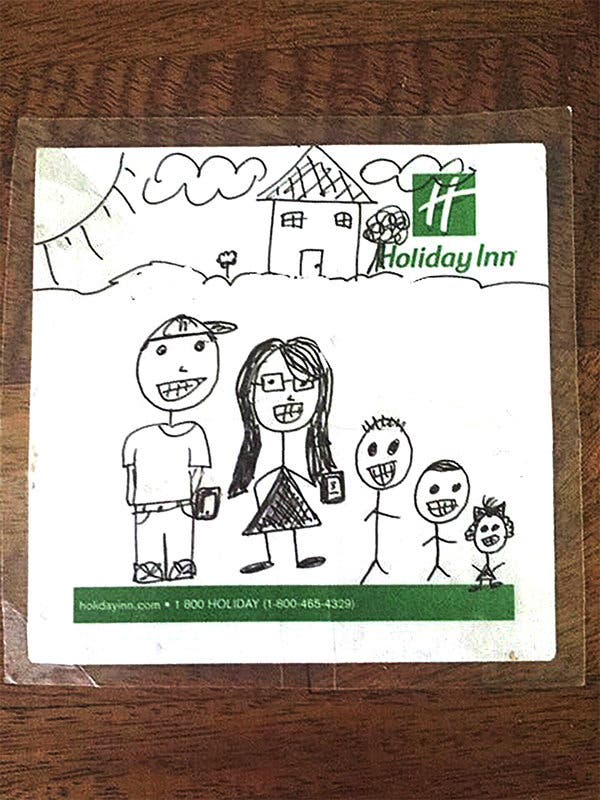 An American government escort handed over the 5-year-old child, identified on his travel documents as José, to the American woman whose family was entrusted with caring for him. He refused to take her hand. He did not cry. He was silent on the ride “home.”

The first few nights, he cried himself to sleep. Then it turned into “just moaning and moaning,” said Janice, his foster mother. He recently slept through the night for the first time, though he still insists on tucking the family pictures under his pillow.

Since his arrival in Michigan, family members said, a day has not gone by when the boy has failed to ask in Spanish, “When will I see my papa?” “I am watching history happen before my eyes,” said Janice. “It’s horrendous.”

In the last couple of weeks, the one thing that animates Jose is discussing his “photos,” as he calls the family drawings.  He points to the figures of his parents, brother, and younger sister.  “Mi familia,” he says.  He stares at the picture of his father. 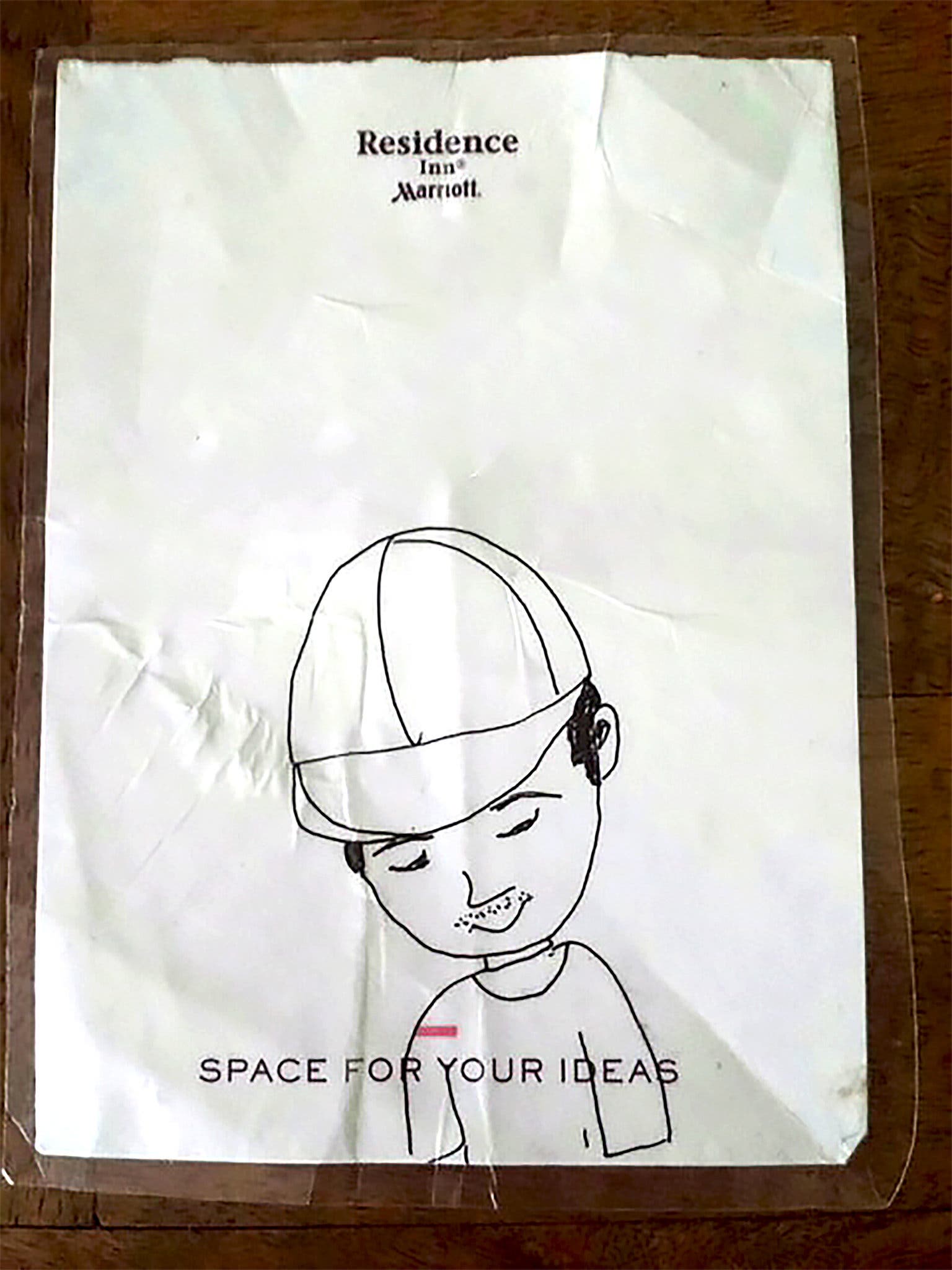 It was “just me and him” on the trip from Honduras, he told Janice one night as he lay in bed shuffling the pictures, taking turns looking at one and then the other. “He holds onto the two pictures for dear life,” Janice said, through tears. “It’s heart-wrenching.”  (New York Times, Jun 8, 2018)

I can’t speak for Jose, but I wonder what he is learning of evil through the lens of family?