Posted on September 2, 2018 by reallifepastor 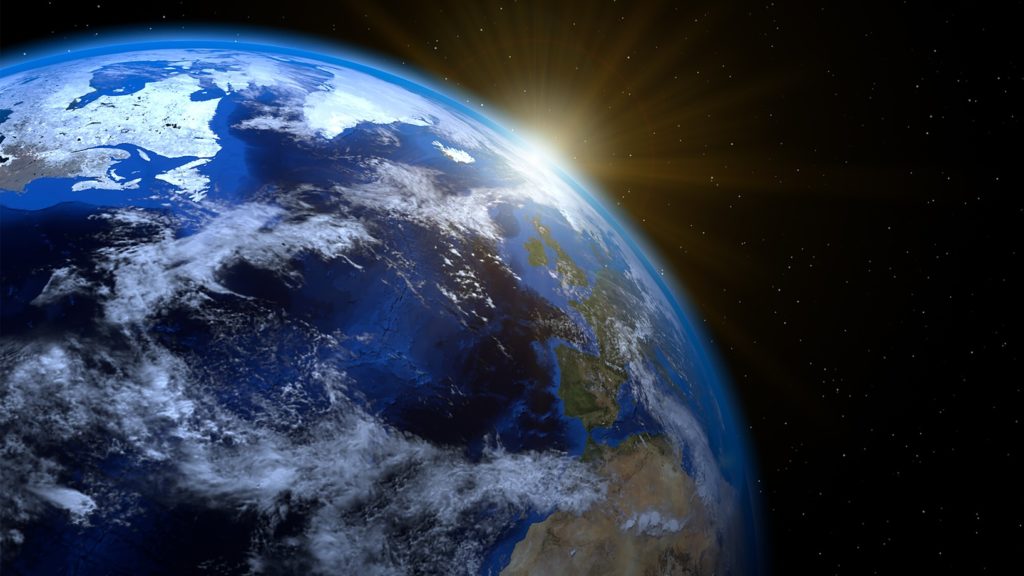 So…did you enjoy playing God?  What power!  “Let there be light!”  And there was light!  Let there be sky, land, sea, animals, creepy crawly things…and there were!

Our sacred Scriptures begin where the sacred texts of most religions begin–with the story of how we got here….or in our case, the stories of how we got here.  In Genesis 2, we get the story of Adam—literally, Earth man….how he’s lonely so God creates animals, and how when that doesn’t help, God creates a “helper” out of Adam’s rib…yeah.  We’ll deal with THAT text another day.

Today, our focus is the other version of creation, the one found in Genesis 1.  As we read just now, did you feel the rhythm of the passage?  God said, ‘Let there be’….  And there was.  And as soon as it was, God named it–sky, land, sea.  Then, “God saw that it was good.”  “There was evening and there was morning, the first day.”  “The second day.”  “The third day.”

The rhythm of the passage suggests it was written for a worship service.  It’s similar to what we do during prayer time when we say “God in your mercy, Hear our prayer.”  The rhythm of the response, the structure it creates helps us organize our prayers.  The structure also frees us to open our hearts, minds and souls to whatever God is doing in the moment.

That’s what we get in Genesis 1–we get a rhythm, a structure that helps us open our minds and hearts to what God is doing in the midst of creation.

So, what is God doing in the midst of creation?  In Genesis 1, how does God create?  You just played God in the reading a minute ago.  So, God, how did you create?

“God said…”  That’s God’s primary action in Genesis 1: speech.  “God said…”  It doesn’t say God created these things; it says, “God said, let there be light.” And there was light.  In Genesis 1, creation happens in response to a word spoken by God.

Allen and I talk a lot in the car.  He drives most of the time.  I help in whatever ways I can, mostly through speech.  Like this past Friday.  Allen, kind soul that he is, was driving me to get some bloodwork done.  Fasting bloodwork.  No food.  No caffeinated beverages.  You get the picture.

So, we get to the traffic circle up here at College and Allen pulls into the circle at a point that was CLEARLY too soon.  I used my speech to inform him of this fact.

As Allen often does when I use my speech to offer helpful insights, he used his speech to explain that he had done a quick calculation and had ascertained that there was plenty of time to enter the traffic circle in complete safety for all concerned.  To which I replied:  “I haven’t had my coffee yet!  Please factor that into your driving!”

Let’s analyze this “speech event.”  Why did I speak?  First, I wanted to connect with my beloved spouse.  Once that connection was made, I hoped to communicate a specific intention to him.  I’m pretty sure I was successful on that point.

So, I wanted to connect with Allen and I wanted to communicate a specific intention to him.  In addition to connecting with him and sharing my intention with him, I confess that I also was hoping for Allen to respond in a specific way.  My way.   But we’ve been married a long time.  In that time I’ve learned that I can say whatever I like, I can hope for whatever response I want to hope for from my wonderful spouse, but at the end of the day, he’s going to respond how he responds.  So, in addition to my words helping me connect with Allen and revealing my intention to him, they also placed me in a vulnerable position—Allen could change his driving behavior.  Or not.

So, per this meticulous scientific study, we can conclude three things about speech.  Speech reveals, first, a desire to connect with the one addressed, second, the speaker’s intention, and, third, vulnerability on the part of the speaker.

Divine speech in the act of creation reveals the same things.  By speaking an invitation to creation, God reveals a desire to connect with something other than God’s self.  And when God says, “Let there be light,” God reveals God’s intention that light happen.  Notice that God doesn’t command light to be.  “Light–BE!”  No, God says “Let there be.”  God’s word comes not as command but as invitation.

But God’s God, right?  God can do anything!  So why in the world would God choose to be vulnerable?  Why would God create space for creation to say no?  Why would the divine creator depend on fallible creatures (which includes fallible human beings) to nurture creation into being?  Surely, there must have been a more efficient means of creating!

As we begin the season of creation today—which we’ll do every September—the insight we gain from God’s speech in Genesis 1 is the foundation for everything else that will come.  God wants to connect with creation, God has hopeful intentions for creation, but God will not force creation to become itself.  No matter what part of creation we’re looking at—humanity, the sky, mountains, or animals—God only invites us to become who God hopes we will become.

Maybe…but I don’t think so.  Why would God choose to give creation a choice about becoming itself if not because God believes we can and trusts us to make the right choices?  And by “right,” I mean choices that will act creation into wellbeing, choices that will help all creation become who it is created to be?

I don’t know about you, but in the last two years, I’ve begun to doubt the power of my speech to do anything to help nurture creation.  Shortly after the current administration began its work, my U.S. representative back in Georgia introduced a bill to abolish the EPA.  I know legislators introduce all kinds of bills all the time.  But abolish the EPA?  Who could possibly think that was a good idea?

Apparently more people than just my representative.  This summer, we’ve seen the effects of climate change rachet up significantly—more and more intense wildfires, significant flooding across the globe, glaciers melting, more and more intense storms, rising oceans….  And how is our government responding to this alarming evidence of climate change?  By rolling back environmental standards that were kind of pitiful to begin with.  Anybody else feeling powerless?  And voiceless?

In the name of our God, who creates us, redeems us, sustains us, and hopes for the wholeness of all creation.  Amen.