Posted on November 11, 2018 by reallifepastor

Before I started hanging out with the nuns, I had an idealistic understanding of community life.  BNE–Before the Nun Era–I believed community to be a place where everyone  is welcome and gets along with each other.  As one of my clergy colleagues said last week, “Isn’t church just supposed to be full of happy people?”  Our laughter rang loudly.  And long.

In my BNE idealism, I struggled to find a community that lived up to the everyone-gets-along-and-is-HAPPY-all-the-time ideal I imagined.  With each disappointment, I’d leave and begin a new search for the “perfect” community.

My perspective on what makes a strong community shifted when I started hanging out with the nuns.  Each religious order has a charism or focus.  When people commit to the community, they commit to the charism, too.  For Jesuits, for instance, it’s scholarship.

A case in point.  Sr. Luke–one of only a handful of extroverts in the community–once said, “Living with introverts is hell!”  When I asked her what she meant, Luke said, “Oh.  I am so sorry.  I should not have said that.  I was out of line.”  “But you did say it,” I told her.  “I’m curious to know what’s difficult about living with introverts.”  As an introvert, I already was well-acquainted with the difficulties of living with extroverts. J  Luke’s response?  “With introverts, you never know what they’re thinking!”  To which I thought, “And you never don’t know what extroverts are thinking!”

Yeah.  Living in community is Really.  Hard.  Work.  But it’s so important…and so necessary.  “I am because we are,” right?

It’s like Nadia Bolz Weber said when she pastored a church, “It’s my practice to welcome new people to the church by making sure they know that House for All Sinners and Saints will, at some point, let them down.  That I will say or do something stupid and disappoint them.  And then I encourage them to decide before that happens if they will stick around after it happens.  If they leave, I tell them, they will miss the way that God’s grace comes in and fills in the cracks left behind by our brokenness.  And that’s too beautiful to miss.”

The image of the tree offered by the prophet Jeremiah is an apt illustration of the vow of stability.  Blessed are those who trust in God…They shall be like a tree planted by water, sending out its roots by the stream. It shall not fear when heat comes, and its leaves shall stay green; in the year of drought it is not anxious, and it does not cease to bear fruit. 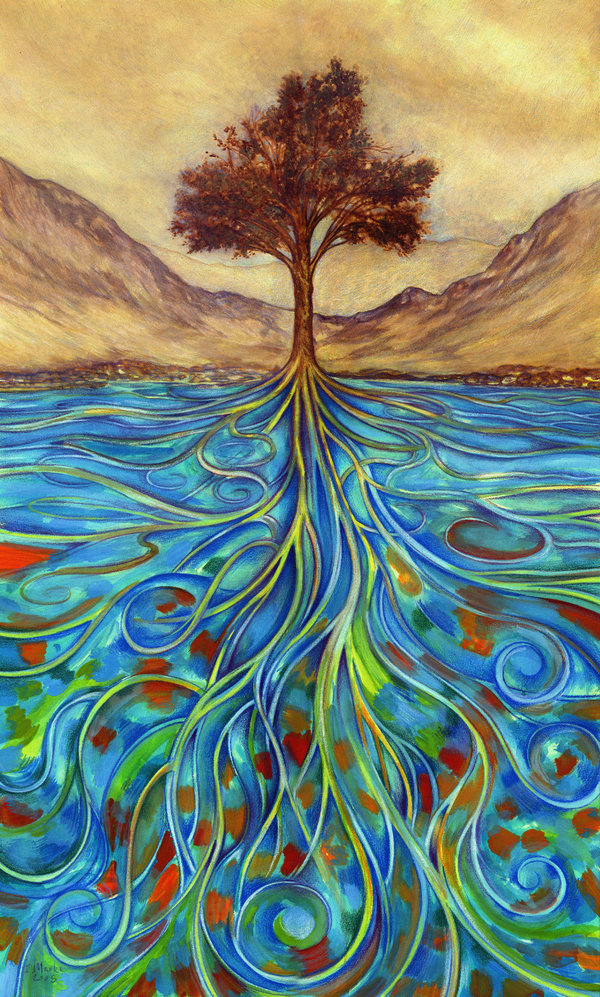 Except in the case of small ones, trees don’t have the option of moving somewhere else when conditions get hard.  They have no choice but to stay where they are and deal with and adapt to whatever happens around them.  And, as we learned last week, for trees in a forest or a grove, staying where they are is important…because trees live in community, communicating with each other and caring for each other.

I’m reminded of what the professor said during my first class in seminary.  He said, “Don’t try to find a community in a moment of crisis.  Work on building your community now so they’ll already be there when crisis comes.”  When we commit to community, when we put down roots, when we stretch out to our life source, then we need not fear when heat comes, our leaves will stay green, when drought comes, we won’t be anxious, we won’t cease to bear fruit.”

Our community has experienced another transition this week…one in a long line of transitions over the past three years.  Transitions are hard.  They can feel de-stabilizing.

That said, transitions also can be times of tremendous growth for communities.  Transitioning from who we’ve been to who we’re becoming invites deep reflection.  Of course, that kind of reflecting can happen during stable times, but the urgency ratchets up during times of transition.

Today’s theme was set many weeks ago.  As we prayerfully consider our financial commitments for 2019, the last two weeks we’ve looked at our past and our present.  This week, we look to our future.  That’s why I asked Byron to offer today’s stewardship testimony.  If we want to ensure a strong future for our congregation, we need to listen to those who will inhabit that future.

Have you heard about the lawsuit filed by 21 young people over the US government’s climate change policies?  Juliana v. United States was first filed in 2015.  The government has requested several times that the case be dismissed.  On November 2, the Supreme Court ruled that the case can move forward.  It could go to trial as early as this month.

“The lawsuit claims the federal government encouraged the production of oil, gas and other fossil fuels, causing the planet to warm and infringing on several of the plaintiffs’ fundamental rights—rights to clean water and air, to the pursuit of life, liberty, and happiness. The lawsuit lists examples that the government knew the Earth was warming as early as 1965, and it requests a court order for the government to decrease carbon dioxide emissions as well as the creation of a national plan to “restore Earth’s energy balance” and “stabilize the climate system.”  https://www.npr.org/2018/11/03/663887560/young-activists-can-sue-government-over-climate-change-supreme-court-says

In response to the November 2 decision, Kelsey Juliana, the oldest plaintiff at 22 years old, said, “I want to trust that we are truly on track for trial without having further delays, but these defendants are treating this case…and the security of mine and future generations like it’s a game.  I’m tired of playing this game.”

The youngest plaintiff, Levi Drenheim who is 11, said, “I love the environment and I love to be outside.  When I realized there was such a thing called climate change, I realized that I need to do something about it.”

(Hat)  Do you remember this hat?  My first or second Sunday, I asked the children what they thought we could do to help our church.  They quickly decided that we need to wear hats.  The following Sunday, many of us wore hats.  It was a playful gesture, but one that symbolized our commitment to listening to the children and teenagers in our midst.

Then, on February 14th, a 17 year old gunman entered the Marjory Stoneman Douglas High School, in Parkland, Florida, and opened fire.  Seventeen people were killed.  As we and the rest of the country grappled with how to respond to the shooting, this hat became a symbol of listening to the young people.

Tuesday’s election demonstrated what can happen when we do.  Younger voters—many of them first-time voters—made the difference in many elections across the country.  In Georgia’s 6th congressional district, Lucy McBath, the mother of a teenager gunned down in Florida for playing his music too loudly, was elected on a platform of reducing gun violence.  The Parkland students have had to put up with a lot of abuse from some quarters, but they have led us as a country to reflect on who we are and on what kind of future we are creating.

In the coming days, weeks, and months as we navigate this latest transition here at FCUCC, as we reflect on who we are as a community, and as we discern where we are headed, we’ll do well to continue listening to our young people.  We’ll also do well to focus on our roots, to shoot them out to each other and to God.  If we do that, we’ll have no cause to fear when heat comes.  Our leaves will stay green.  When drought comes, we won’t be anxious.  And we will not cease to bear fruit.  Thanks be to God!