Posted on February 24, 2019 by reallifepastor

A sermon a few weeks ago invited us to hear I Corinthians 13–the love chapter–in the context of a current-day situation.  Later, during Friendship Time, I encountered someone who wasn’t smiling.  When I asked about the lack of joy, the person told me, “I tried what you said.  I imagined the president.  It didn’t work.”

I share this story not to poke fun at the president but to acknowledge how difficult it can be love people with whom we don’t agree or who do things we deem misguided or, in some cases, inhumane.  For many in this room, our president represents “the enemy.”  For others of us, our enemies have different names.

In Jesus’ day, the enemies for the Jewish community were clear–Caesar, the Roman government, Herod, the Jewish tetrarch…sometimes, even, the religious authorities.  For decades, the policies of these enemies had oppressed the poor, the religious minorities, the outcasts.

It is to these oppressed, poor people to whom Jesus says, “Love your enemies; do good to those who hate you,” and all the rest.

Why?  Why does Jesus tell people at the bottom of the social ladder, people who’d been abused and mistreated, to love their enemies?  It sounds a lot like pastors telling abused women to return home and try to make things work.  Is that really what Jesus means?  Whatever happened to “speaking truth to power”…or advocating for the poor…or doing justice?

Like some of you, I was disappointed with the 2016 election…but not for the reason you might think.  My disappointment began in the year leading up to the election.

Having initially come from a conservative denomination and living in a region that was, until recently, rabidly conservative, I think I’d come to idealize those who were more liberal theologically and politically.  In my mind, liberals were above reproach.  As those who actively advocated for the least of these, liberals were very good people.

Then I started reading my Facebook feed.  Holy moly!  The venom I read in some of the posts of my friends sounded a lot like the venom I’d heard spewed from the other side.  I certainly agreed with most of what was said, but the way it was said?  That made me very uncomfortable.  I guess that’s when I realized that, liberal or conservative, we’re all just human beings who are passionate about what we believe.  Sometimes that passion overtakes our ability to see each other–to see all people–as human beings equally loved by God.  As flawed human beings, sometimes we lose touch with our capacity for empathy.

…which is why passages like today’s words of Jesus are so crucial.  “Do unto others as you would have them do unto you.”  Empathize, Jesus says.  Is it hard?  Yes.  Is it more satisfying to stay rooted in righteous indignation?  You betcha!  Is empathy necessary to creating the world of which God dreams?  I’m afraid so.

Simon Wiesenthal was a Polish architect who was sent to a concentration camp in his native Poland in 1942.  One day, the men from Simon’s hut were marched to a nearby hospital to work.  As Simon toiled at removing piles of putrid bandages, a nurse approached him.  “Are you a Jew?”  Simon stood there.  The nurse said, “Come with me.”

Terrified, Simon followed.  The nurse took him up three flights of stairs to a room with just one patient.  The patient’s body—including his face—almost completely wrapped in bandages, Simon knew the man was near death.  As the nurse slipped out, Simon again wondered why she had brought him to this dying man’s room.  He stood beside the bed waiting.

The man thanked Simon for coming…then began telling his story.  He was from Stuttgart, Germany, and had been raised a faithful Catholic in a loving family.  At 16, Simon had joined the Hitler Youth.  Later, he joined the SS.

As Simon listened to the man’s story, he could not fathom why he’d been summoned.  The man went on.  He described some of the campaigns he’d been on, some of the things the Nazis had asked him and his fellow SS members to do.

After hours of talking, the depleted soldier arrived at his point.  He related an incident that happened shortly before the injury that sent him to the hospital.

In a Polish village, the SS were rounding up Jews still living in the city.  Many of the Jews ran to a single, three story house for cover.  Once the house was filled, another 100 people streamed in.  The SS surrounded the house with orders to shoot anyone who tried to escape.  As Karl held his position, he looked up at a second floor window.  Framed in the window, he saw the face of a young child with his mother and father.

When the grenades Karl and the rest of the SS threw into the house exploded, Karl saw the mother, father, and child jump from the window.  Once on the ground, they were shot.

The image of that family had haunted Karl since it had happened.  Before Karl died, he wanted to confess.  He also wanted a Jew to forgive him.

Now, Simon knew why he was there–this young SS member wanted him, a Jew, to forgive him for committing a heinous crime against Jews.

Simon left the room without saying anything.

For the rest of his life, Simon wrestled with what he should have done.  Should he have forgiven the obviously repentant man?  But who was he to absolve sins that had been committed against someone else?

Simon talked with his friends about what he should have done.  A book called, The Sunflower, contains essays by contemporary people who wrestled with the question as well.  Sven Alkalaj, a Bosnian Jew.  Desmond Tutu from South Africa.  The Dalai Lama, who’s spent the last half century in exile. 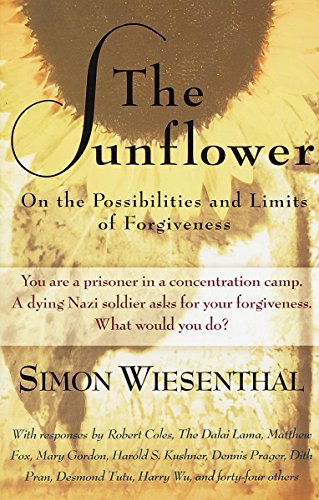 Much of what we hear about these days seems rooted in a lack of empathy.  Sexual abuse crises in the Roman Catholic Church and the Southern Baptist Convention.  Family separation policies at the border.  The debate Methodists are having over inclusion of LGBTQ people.  Voter fraud in our own state, both in terms of gerrymandering and overt criminal activity.  If people, especially people in power, had been able to empathize, that is, to see things from someone else’s perspective, might it have prevented some of this bad news from happening?  Might innocent people, children, have been spared trauma?  If as a species we were more adept at empathy, might we be closer to making God’s dreams for the world come true?

Okay, everybody.  On three, let’s do a deep sigh.  1. 2. 3.   Sigh.  One commentator has likened serving up today’s Gospel lesson to serving his children cooked spinach for supper.  “No matter how much I explain the nutritional value,” he says, “no one around the table really wants to dig in.”  (Feasting on the Word, 12577)

But dig in we must.  Empathizing with people means seeing them as the holy, flawed human beings they are.  It also means seeing ourselves as holy and flawed.  I know.  When others are being un-empathetic, the temptation is to stoop to the same level.  When our enemies dehumanize, our gut-reaction is to dehumanize our enemies.

It’s a temptation we must resist.  Because, if we are to fulfill God’s dreams for the world, if we are to create God’s realm here on earth, if we are to have any hope of acting the world into wellbeing, we are going to have to see and treat every person–every person–as a person, as a wholly holy human being, as a beloved child of God.

In the process of wrestling with the rightness or wrongness of forgiving Karl, a couple of years after the war, Simon decided to visit Karl’s parents.  He took the train to Stuttgart.  He found a city in shambles.

When he arrived at the address of Karl’s family home, he saw that the top half had been bombed away.  Yet, when he knocked on the door, a frail-looking woman answered.  Karl learned that the woman’s husband had died.  She invited Simon in.

When the woman told Simon her son had died in the war, Simon told her he knew.  That he had met Karl while working on the railroad.  That was the point at which Simon decided not to reveal to the grieving wife and mother how he had met Karl.

In their conversation, several times Karl’s mother referred to Karl as a good boy.  “He was such a good boy.”  At one point, Simon wandered to the wall where a picture of Karl hung.  It was the first time he’d seen Karl’s face.  To Simon, Karl looked like a good boy.

Though Simon never resolved whether he should have forgiven Karl, he did decide in the visit with Karl’s mother not to reveal all he knew about her son.  What would have been the point?  The woman lived alone in a bombed out house with only memories of her husband and son.  Learning the whole truth would have devastated her.  Hadn’t there been enough trauma?

Simon’s visit to Karl’s mother after the war was an exercise in empathy.  It was the desire to know more about Karl, to understand better where the young man was coming from, that sent Simon to Stuttgart.  Simon’s empathy didn’t change the horror of the crime Karl committed, but it did help him to see how Karl–a basically good person–had gotten pulled into a corrupt system that had transformed him into a murderer.

“Love your enemies.  Do good to those who hate you.  Do unto others as you would have them do unto you.”  Eat your spinach!  Spinach made Popeye stronger.  Maybe this “spinach” will make us followers of Jesus stronger, too.