The first Mercy Walk was…instructive.  After a time of prayer and reflection, Sandy Clark and I set out for the Vance Monument.  The initial plan had been to offer ashes at AHope.  When I spoke with the folks at AHope, they thanked us for the offer, but said that because so many of the people who come to AHope have been wounded by church, our being there to impose– yes, impose–ashes…likely wouldn’t have been well-received.

When I heard the explanation, it made sense.  Though I had hoped to offer folks at AHope a religious ritual that has deep meaning for me, I wasn’t being very empathetic about it.  I had been assuming a similarity of context that doesn’t exist.

How many of our well-intentioned acts of service are based on similar faulty premises?  How often do we “impose” gifts on people they do not wish to receive? 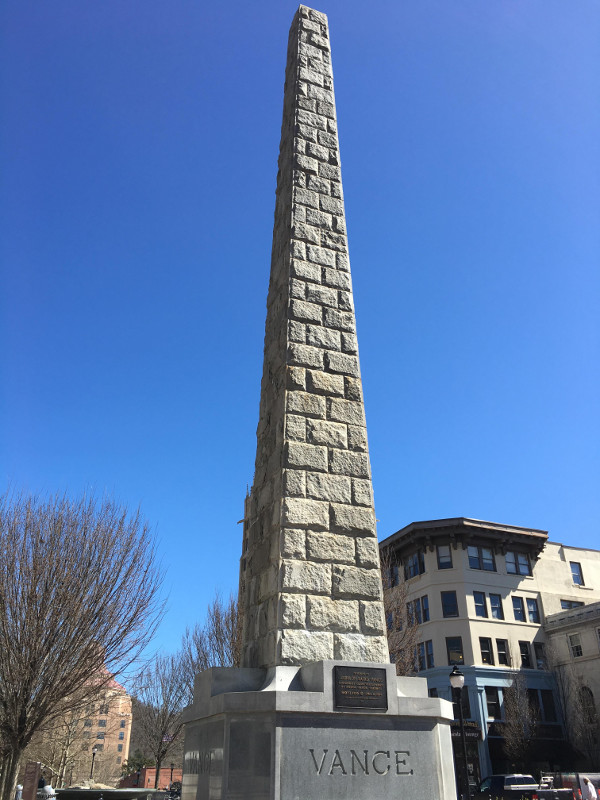 So…Plan B—the Vance Monument.  Once Sandy and I arrived, we imposed ashes on each other.  Great!  Now what?  We waited.  And waited.  I began to wonder what in the world we were doing there.  What?  Did I imagine people streaming to the monument to receive ashes?  “Finally!  Someone’s imposing ashes in downtown Asheville!”  (It is called Asheville, after all.)  We didn’t have a sign; I doubt people even knew what we were doing.  I thought about shouting an invitation, but decided, “Hey!  Come over here so I can remind you you’re going to die!” probably wouldn’t be very inviting. 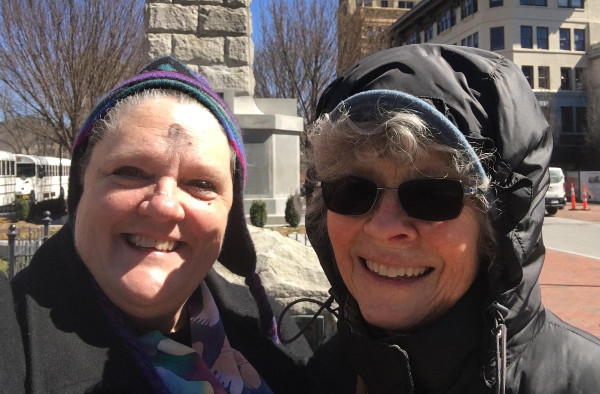 So, we stood.  We talked.  We took pictures of the pigs and turkeys.  Rick Johnson joined us.  We imposed ashes on him, too. 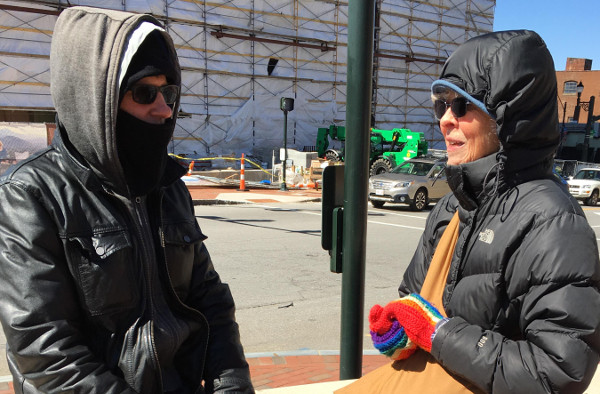 Then we read the plaque on the monument just in front of the Vance monument.  That plaque reads:  “Erected and dedicated by the Daughters of the Confederacy and friends in loving memory of Robert E. Lee and to mark the route of the Dixie Highway.”  Want to guess when that monument was installed?  1926.  Over 60 years after the end of the Civil War.  What point could they have been making except reasserting white supremacy?

By the beginning of this century, the monument had fallen into disrepair.  In 2012, a Civil War re-enactment group formed a partnership with the Department of Cultural Arts of the city of Asheville to restore the Vance Monument.”  https://docsouth.unc.edu/commland/monument/205/

Renovation of the monument was completed in 2015.  June 17th of that year, gunman Dylan Roof assassinated 9 worshipers at a Wednesday night Bible study at Mother Emmaunel AME Church in Charleston, South Carolina.  The Vance Monument became a flash point of outrage in response to the shooting.

We have two Scripture texts today.  The first contains a ritual of thanksgiving offered by the Israelites for having broken free of slavery. The second recounts Jesus’ journey into the wilderness for a time of reflection and temptation after his baptism.

The story of the Exodus is pivotal for many African American Christians.  The parallels between their and the Israelite’s stories are clear–enslaved, abused, crying out for freedom, then finally receiving it.  The Israelites do have to wander around the wilderness for a few decades, but after that, they move into their new land, a land flowing with milk and honey.  They settle there, create their own farms, produce their own crops.  This bit from Deuteronomy enjoins them to offer their first fruits as a thank you for having arrived.

Great story.  Great songs.  A hopeful story for an enslaved people longing to be free…

In an article titled, “Canaanites, Cowboys, and Indians,” Robert Warrior interprets the story of the exodus from the perspective of Native Americans.  Because of his experience as one whose land was stolen by settlers who also thought they had a God-given right to land belonging to others, he doesn’t identify with the Israelites so much as with the Canaanites.

I thought about the Warrior article Wednesday at the Vance and Lee monuments.  Both monuments were built in a context of white supremacy.  I suspect there are still folks around who consider Vance and Lee “beloved.”  For folks with histories similar to mine, the monuments have another context—the context of trying to atone for our country’s original sin of racism.

On Wednesday, an African American man in dreadlocks walked quickly past us with his head down.  I would love to have talked with him about the context in which he understands the monuments.  And I wonder through what lens the people who spray painted the monument with “Black Lives Matter” after the Charleston church shooting see it?

Key to authentic and effective social justice work is recognizing that we’re all navigating different contexts.  We traverse the same streets, the same geography, but our journeys differ vastly depending on our social contexts.  Skillfully navigating among the various contexts is vital to our work of acting the world into wellbeing.  Had I navigated more skillfully the differing social contexts between me and folks at AHope, I might have thought twice about going there to *impose* a ritual they might not want.

The three temptations Jesus faces during his wilderness sojourn are questions about context. Each temptation asks: Will you act out of a context of power and privilege?  Or will you act from a context of solidarity and empathy?  Each time, Jesus rejects power and privilege. Each rejection strengthens him.  He leaves the wilderness ready to engage in the work before him.

If you haven’t taken on a Lenten practice yet, here’s a possibility:  take on the practice of reflecting on context.  How does your social context differ from the contexts of others?  How might an understanding of differing social contexts inform how we act the world into wellbeing?

There is so much that divides us.  Inhabiting different social contexts means we inhabit different worlds.  In light of this great divide, what hope is there for us to act the world into wellbeing?   Is there no common ground?  Is there nothing that connects us?

Toward the end of Just Mercy, Bryan Stevenson suggests there is one thing that does unite us.  One thing connects all human beings:  our brokenness.  He writes:

“We are all broken by something. We have all hurt someone and have been hurt. We all share the condition of brokenness even if our brokenness is not equivalent. I desperately wanted mercy for Jimmy Dill (a prisoner Stevenson represented) and would have done anything to create justice for him, but I couldn’t pretend that his struggle was disconnected from my own. The ways in which I have been hurt—and have hurt others—are different from the ways Jimmy Dill suffered and caused suffering.  But our shared brokenness connected us.”    Just Mercy