“A chartered Immigration Service plane crashed and burned in western Fresno County today, killing 28 Mexican deportees, the crew of 3, and an immigration guard.

“An hour after the airliner appeared to explode over Los Gatos canyon near Coalinga, shortly after 10:30 a.m., 19 bodies had been recovered from the smoldering wreckage…

“Irving F. Wixon, director of the U.S. Immigration Service at San Francisco, said the Mexican nationals were being flown to the deportation center at El Centro, California, for their return to Mexico.”

Subsequent newspaper articles named the pilot, co-pilot, flight attendant, and guard:  Frank Atkinson, Marion Ewing, Bobbie Atkinson, and Frank E. Chaffin. In the days after the crash, a couple of articles attempted to name the other 28 who died, but lists were inconsistent; mistakes were rampant.  After that, the 28 remaining passengers who died in the crash were listed only as “Deportees.”

Seeing one of those articles, poet and songwriter, Woody Guthrie, seethed that no one cared enough about the humanity of those 28 people to learn the most fundamental piece of their humanity–their names.  Guthrie poured his anger into the poem that became the song Larry just sang.  (Guthrie’s words were later set to music by Martin Hoffman.)  “All they will call you will be deportees.”

We’re seeing so many images from the border these days.  The two that have lodged in my brain are the ones of children in cages and hundreds of people standing around in enclosures underneath overpasses.  Each of those people, each of those children has a name.  Each has a story.  None would have chosen to be held behind chain-link fencing.  Had conditions been livable and safe, it’s likely they would much rather have stayed in their home countries.  But they have fled in terror.  Only to meet a different kind of terror thousands of miles from home.

The familiar story of Martha and Mary’s welcoming of Jesus in today’s Gospel story has gotten lots of press over the years.  Some folks fault Martha for focusing only on the details of cleaning.  Indeed, Jesus encourages her to soften her obsession with being a good host.  Other folks (likely from Martha’s spiritual tribe) fault Mary for shirking her hosting duties to sit at Jesus’ feet and learn from him.

While Jesus seems to favor Mary’s approach in this story (“She has chosen the better part”), it’s clear that both approaches to hospitality are needed.  A case in point:  Friendship Time. What happens here in worship is important.  But the really important stuff happens downstairs after worship.  We visit with each other.  Back in the Baptist church, we didn’t have friendship time.  After becoming a pastor in the UCC, I learned how IMPORTANT coffee hour is to congregationalists.  It’s, like, IMPORTANT.  It’s important because it gives us a chance to get to know each other, to check in with each other, to spend informal time together, plotting, planning, laughing, sharing.

But what happens when the details aren’t attended to?  What happens when the Kuerigs aren’t brought out, or we run out of cups or creamer?  What happens when no one stays to clean up?  If all the little nuts and bolts of the snack part of Friendship Time aren’t attended, the anxiety level in the room rachets up.  As the anxiety goes up, the quality of the visiting goes down.  In order for the visiting part of Friendship Time to go well, the many details of the snack part must be attended.

And, of course, if we only come down to ooh and aah over the well-appointed refreshment tables and efficient clean-up crew, then we’ve missed the point of Friendship Time all together, which is to visit.

Friendship Time needs both Marys AND Marthas.  For all of it to work, we need both attention to the details of snacking as well as a willingness to share our lives with each other.

At the same time, though, like Mary, we also must stay tuned in to the humanity of every person who appears at our border.  Mary sat at Jesus’ feet and soaked up every word he said.  She opened her mind and her heart to Jesus.  If our immigration laws and practices do not honor the humanity of emigrees and refugees, if we don’t expend the effort to learn people’s stories, their reasons for seeking asylum, if we don’t care enough to learn people’s names…

In my newsletter article this week, I invited you to wear clothing in shades of brown and black today…as a way–especially for those of us who are white–to remind ourselves of the humanity of those whose skin is darker than our own.  It grieves me to say this, but we all know it’s true–our world runs on color.  Anywhere you go, the lighter the skin, the greater the privilege.

At music camp last week, a young woman who was born and raised solidly middle-class in Rio de Janeiro, teared up as she told us what it’s like to go from being white in her native Brazil to becoming “just another brown-skinned latina” in our country.  Her skin tone is exactly the same.  But the perception of color in our country means that she is treated differently here.

In a recent Facebook post, a singer-songwriter friend wrote, “As a citizen of this nation, a Black male traveling musician, I have NEVER felt as unsafe and needful of being aware, cautious and on point as I now do since…unexpressed demons of hate and prejudice have been unleashed in our nation. The anger and uncompromising acts of rage have increased exponentially in the wake of non-stop assaults on people of color, women, and people from the LGBTQ community.  The looks I get from people in rest stops and stores are unbelievable.”

Our world runs on color.  It sorts us into categories of worthiness based on something as arbitrary as the amount of melatonin in our skin cells.  It’s absurd.  And it’s real.

We spend a lot of time in our Racial Justice Team meetings talking about how helpless we feel in addressing racial injustice.  The problems are so huge, so intractable…and for most of us, our skin is so white.  What can we possibly do to act people of all melatonin distribution levels into wellbeing?

Today, we’ll start by reading aloud the names of the 28 initially unnamed people in reports of the Los Gatos plane crash in January 1948.  Thanks to the investigative work of author Tim Hernandez, those 28 people have been identified.  In 2013, the original memorial plaque that read, “28 Mexican Citizens who died in an airplane accident near Coalinga, California, January 28, 1948. R.I.P.” was replaced with a new plaque.  This new plaque now includes 28 names.

A 2013 editorial in the New York Times ended with these words:  “America has changed a lot in 65 years, but not enough. We are still a country that eagerly, if not desperately, accepts the labor of immigrants but is slow to acknowledge their humanity. When singers perform Guthrie’s song today, not a word is out of date.”  (NY Times editorial, 9/7/13)

We’ll end today by speaking aloud the names of all 32 people who died in the crash on January 28, 1948.  We say their names to acknowledge their humanity…and to remind ourselves that every person in detention at our southern border, every parent carrying children through the Mexican desert desperate for a better life, every child who cries herself to sleep at night in a strange home wondering if she’ll ever see her mother again…we say these names to remind ourselves of the humanity of us all. 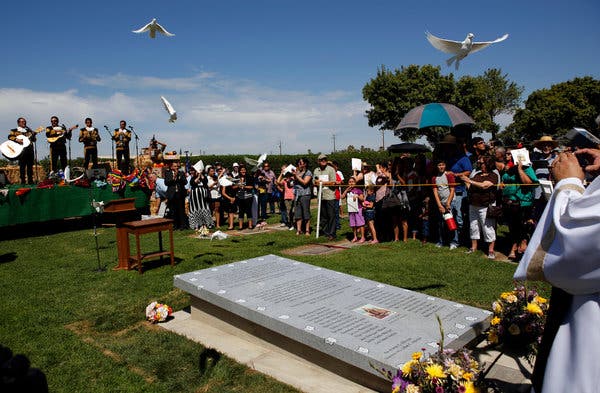