Posted on November 10, 2019 by reallifepastor

Some of the people gathered that morning in the footprint of the old temple remembered the former temple’s glory…the tall pillars, the broad areas for prayer and study, the entrance to the Holy of Holies, where God once lived.  They remembered pilgrimages to the temple, making their offerings, and, especially, the excitement of the high holy days.

After nearly 70 years, the exiles have returned to Judah.  They’ve slowly begun to rebuild…first, the protective wall around the city, now, the temple.  After laying the foundation for the new temple, they apparently had grown discouraged.

Sensing that discouragement, Haggai–feeling a nudge from God–speaks to Judah’s governor, high priest, and people.  The prophet asks those gathered around the empty space where their beloved temple used to be:  “Who here is left among you who saw this Temple in its former glory?”  I suspect a few aged arms were lifted.  “And how does it look to you now?” the prophet asks.  I imagine heads dropping in sadness.  Perhaps the prophet’s voice got softer here.  “Doesn’t it seem like nothing in comparison?”  Were those sighs the prophet heard?

The grief–and disappointment–must have been overwhelming.  To have lost your country…to have lived in exile…to have returned from exile only to find things a mess, still in need of rebuilding.  Of course, the people were discouraged.  Of course, they had lost hope.

When I first read this text last summer, I thought we’d be using it to talk about the recently-completed renovation of our sanctuary.  Plans changed.  We might still reminisce about the good old days of horsehair plaster and how, maybe drywall wouldn’t be so bad.  We could do that…but I think if we did, we’d be missing the prophet’s point…

When I realized today’s sermon likely would not be about horsehair plaster or drywall, I began to wonder what it would be about.  That’s when it hit me–it’s about the world.

But, like those ancient Judahites, I imagine us, too, standing around, thinking about the former glory of our world–the celebrations of signing the Paris Climate Agreement, the end of Apartheid in South Africa, women in Saudia Arabia receiving driver’s licenses, women in our own country getting the vote a century ago.  The passage in 1964 of the Civil Rights Act, then a year later, the Voting Rights Act (which was not renewed).  In 1990, the Americans with Disabilities Act.  So many amazing things have happened in our world.  MARRIAGE EQUALITY!!!!  Unimaginably good, wonderful, glorious things happened…in the old days.

As I’ve been trying to wrap my head around the idea of Just Peace, I’ve been drawn to the Jewish concept of tikkun olam, repair of the world.  16th c. rabbi Isaac Luria told this story.

Before God created the world, the entire universe was filled with a holy presence. God took a breath to draw back and make room for the world. From that first breath, darkness was created.  And when God said, “Let there be light,” lightness was created filling vessels with holy light. God sent those vessels to the world, and if they had each arrived whole, the world would have been perfect. But the holy light was too powerful to be contained, and the vessels split open sending sparks flying everywhere. Some of God’s holy light became trapped inside the shards of the vessels.  It is our job to release and gather the sparks.  When enough sparks have been gathered, tikkun olam, repair of the world will be complete. 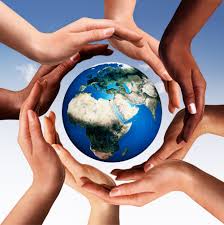 This story is breathtaking in its beauty….that every person, every part of creation carries within us a spark of God’s light…that the path to shalom, peace, wholeness involves releasing those sparks of light so that all the sparks might be gathered together…that the wholeness of the world will come through connection, not domination, through openness, not division.

Another beautiful thing about this story is that it begins with brokenness…yet even in the midst of the brokenness, sees the light in it.  It’s like the second question Haggai asks.  First, he asks:  ‘Who is there left among you who saw this Temple in its former glory?’  The question no doubt, brought to mind pictures of the temple as they remembered it.  With the picture of how things were lodged in their minds, Haggai then asks, ‘And how does it look to you now?’

It’s a brilliant question.  The first question invites people to imagine the past.  When Haggai asks “And how does it look to you now?” he’s inviting the people back into the present, to look clearly at the reality in which they actually are living.

Perhaps the people had gotten stuck.  In their grief over losing what had been, maybe they were struggling to move forward.  Maybe they had thought they were ready to rebuild, but when they actually started gathering the stones and mortar, when they saw the gaping chasm between the tangible materials of rebuilding they held in their hands and their memories of what had been, maybe the grief overwhelmed–even paralyzed–them.

Haggai’s question, “And how does it look to you now?” is perhaps the most prophetic thing in this whole passage.  Because it invites the people to look at reality as it is.  Acting the world into wellbeing, repairing the world–we can’t build that work on our remembrances of how wonderful things were in the past.  If we are to do our work well, we must begin where things are.  Here.  Now.

A great example of this is Bill McKibben’s book, Eaarth.  That’s Eaarth, with two a’s.  The thesis of this book, which was written in 2010, is that climate change would soon reach the point where we would not be able to reclaim the Earth we once knew.  Because we no longer inhabit Earth.  We now inhabit a new, less people-friendly planet named Eaarth, with two a’s.  If we begin, not by trying to recapture old glory days, but grounded instead in what’s real today, if we accurately identify the places where our beloved Eaarth is broken, we’ll be better able to repair the world.

Then he invites them to crawl out of their stuck place and get cracking.  But take courage now, Zerubbabel!— it is Yahweh  who speaks.   Courage, High Priest Joshua ben Jehozadak!  Courage, all you people of the country!—it is Yahweh who speaks.  To work!  Isn’t that a beautiful translation?  To work!  I am with you—it is Yahweh Omnipotent who speaks.  As I promised I would be when you came out of Egypt, and my Spirit remains among you.  Don’t be afraid!  For Yahweh says this:

In this place, I will give peace.  Peace won’t come from their remembrances.  Peace is going to come from looking at things as they actually are.  With these bricks.  With this mortar.  With this world.  With its current state of brokenness.  As we look squarely at what is broken in our world, then we’ll be able to repair it.  When we see what precisely in the world needs to be mended, then we can begin the needed mending…one stitch at a time.  When we release the spark of divine light from our own beings and gather our sparks with others’ sparks, then the world will become whole.  Then the world will achieve shalom.  Then the world will be at peace.

In the name of our God, who creates, us redeems us, sustains us, and hopes for our wholeness.  Amen.