Posted on March 1, 2020 by reallifepastor

“What’s Your God Story?”  Isn’t that a great sermon title?  Full disclosure:  I stole it.  Somebody visited another church and told me about this terrific sermon they heard that asked the question:  “What’s your God story?”  I liked the title and the question…so I stole it.  We clergy call that homiletical research.

Last week, you heard a little about my God story, about feeling called to pastor during seminary when the fundamentalists were taking over…about buying two stoles in Bethlehem, about deciding one day under the chapel at Emory University to follow–really follow–Jesus.

That was my God story.  What’s yours?  Have you always been aware of God’s presence with you?  Or maybe you loved God and felt accepted by God…until you realized that, because of who you were born to be, the God you’d been given by your tradition did NOT love you?  Did you give up on believing in God for a while?  Maybe for decades?  Are you still wondering if there really is a God?  Or maybe you loved God, doubted God, then after a long process of wrestling, came to a new understanding of God and now cherish that relationship.

What’s your God story?  What difference does it make for how you live your life?  That might be a good ice breaker for Midwinter dinners!  Everybody sharing their God stories.

If Jesus came to your Midwinter dinner, what might he say about his God story?

“Yeah, so, I was hanging out with God, helping create the universe and stuff.  Things were going well, but then one day, God sat me down and said, ‘We need to talk.’  Uh oh.

“You won’t believe what God said to me!  God said I was being sent to Earth.  I was going to experience everything about what it means to be human.

“At that point, I reminded God that I was part of the team of creaTORs, not the creaTED.  It didn’t make sense!  But I could tell God wasn’t going to back down, so, I asked, ‘Where are you going to send me?  A mountaintop?  An ashram?  The Temple?  A synagogue?’

“A uterus?  You’re sending me to a uterus?  Yep.  God sent me to a uterus.  When God said I was going to experience humanity fully, that meant from the beginning of life to the end.

“So, I was born–just like all human beings are born.  I think I forgot about the special relationship I had with God for a while, at least I don’t remember having many ideas about God on my own.  But my parents taught me, Mary and Joseph.  They were good people.  They took me to synagogue.  We went to Jerusalem the years we could for Passover.  They were patient with me–most of the time.

“There was that one time, I think I was 12.  We’d been in Jerusalem for Passover.  I loved it!  The rituals, the stories, the seder.  At the Temple, what really drew me in was all the back and forth among the teachers about the sacred writings.  Something about reading the scriptures and hashing them out together…something about that felt holy.  I think that’s when I started remembering the special relationship I had with God.  Reading and talking about all those stories and poems and laws…I felt close to God.

“After that trip to the Temple, I obsessed a little on Scripture and going to the synagogue and debating with the rabbis and teachers.  I worked with my dad in the carpentry business, but I felt most at home at the synagogue.  So, I spent a lot of time there.

“I learned a lot in those conversations at the synagogue.  I’ll be forever grateful to Rabbis Joshua and Jakob and the wise woman Leah.  When I first started opening up to God, when I began making the faith my own, they guided me well.  I’ll always be grateful to them.

“At some point, though, it wasn’t enough.  I needed something more.  Maybe I should say, I felt called to something more.  The carpentry work was fine, though I knew I’d never be the craftsman my dad was.  Debating with the rabbis over Scripture was good, but it had gotten to the point that I was the one asking hard questions, not the other way around.

“And it seemed like keeping all that wrestling with Scripture inside the synagogue…it just seemed like it wasn’t enough anymore.  When Isaiah said to “loose the bonds of injustice,” didn’t that mean we were supposed to do something about it?  When it was written in Leviticus that we were to welcome the refugee, didn’t that mean we were supposed to do it?  When the Psalmist wrote, “You are fearfully and wonderfully made,” wasn’t that a message that needed to be shared with all the people?

“So, one day, I walked out to the Jordan, where my cousin John was preaching and baptizing people.  I didn’t know John real well.  He’d kept to himself out in the wilderness from the time he was a teenager.  On occasion, we did have some enlightening conversations about the prophets.  Mostly, though, those of us in the family left John to his own devices.

“But the crowds had been gathering…and lingering.  John preached about repentance, about the need to turn our lives around and about the new life waiting for us once we do.  It’s true he preached with, um, volume.  But lives were changing as a result of his preaching.

“When I arrived, I felt drawn to the river.  When John saw me, he stopped what he was doing.  We locked eyes.  I told him I wanted to be baptized.  Cousin John, always the stubborn one, said, “No!  I should be baptized by you!” I gave him that special glare I’d received so many times from Mom.  It did the trick.  John shrugged, then reached out his hand.  I waded in.

“When I left God three decades ago, I forgot about the special relationship we’d had.  Along the way, I was blessed to have parents and teachers who re-introduced me to God.  They nurtured in me a love for God, a love grounded in God’s love for me.  They so convinced me about God’s love, that I couldn’t help myself.  I kept studying, studying, studying…until I began opening myself to God again.  By the time I waded into the Jordan, walking toward John’s outstretched hand, it felt like God and I were almost back to where we’d been at the beginning.

“We got even closer–like, really close–when I was coming up out of the water.  As the water rushed down my face and back, I saw a light…and a dove descending.  I heard a voice.  “This is my beloved child.  I am well-pleased with him.”  In that moment, it all came back…well, almost all of it.  I remembered and felt the special connection I had with God.  In a flash, I also realized my mission, my calling.  Just as God had said at the beginning, my mission was to experience the fullness of being human.  Standing there in the Jordan, that’s what I decided to do–to be fully human.  Even unto death.

“As I headed back into town, I think I might have floated a little.  Not really floated.  Who do you think I am, Jesus or something?  No, I was just happy…until I felt drawn to take that turn into the wilderness.  Forty days.  Forty nights.  No food or water.  Temptation.  Lots of temptation…mostly, I was tempted not to believe in the truth I’d come to recognize in my baptism–that God had called me to experience the fullness of humanity and to do everything I could to share God’s love with the world. 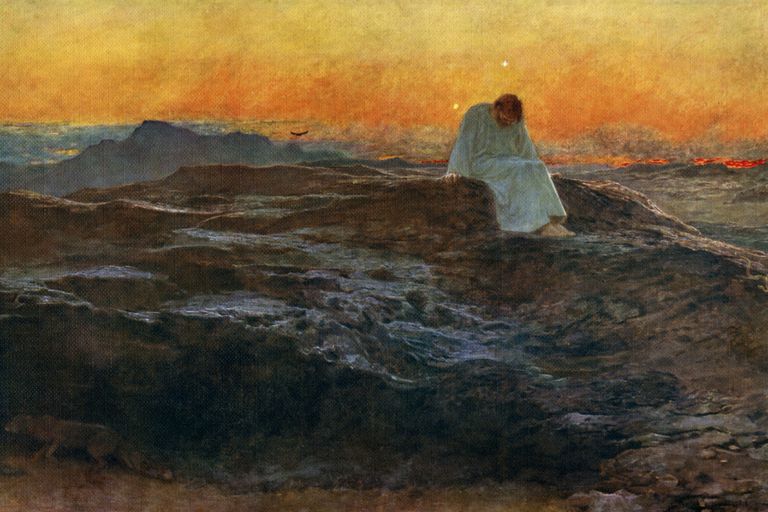 The mom of a precocious 6 year old once shared a conversation they’d had.  “So, Mom,” little Johnny said.  “If Jesus is God’s child and we’re all God’s children, what’s the big diff?”

What is the big diff between Jesus and us?  When you think about it, not much.  We’re born.  We count on our parents and other adults around us to introduce (or re-introduce) us to God.  Through teaching and learning and worshiping, we slowly begin opening ourselves to God.  Eventually, we take the faith for ourselves.  Or not.  In baptism, we understand ourselves to be beloved children of God.  God says God is well-pleased with us, just as we are.

It’s significant that a dove descends when Jesus is baptized.  A dove.  A symbol of peace.  As Jesus opens himself fully to God in baptism, a peace settles on him.  As he accepts God’s acceptance of him, as he connects in his deepest self with who he is and what he is called to do, peace descends…and settles…

Are you?  Are you at peace?