Thousands had gathered to hear the traveling teacher.  News of his kindness, his talk of hopefulness, and his acts of healing had spread throughout the region.  When they heard the teacher and his disciples had landed on the beach in their area, the people made a pilgrimage to the sea to meet them.

The teacher did not disappoint.  So mesmerized were they by his teaching, the group lost track of time.  Then someone’s stomach growled.  Jesus looked out at the thousands gathered and saw how hungry they were–not just for food, but also for hope, peace, dignity, healing.

Responding to all the people’s hungers, Jesus seized the teachable moment.  He asked the disciples where they were going to get food to feed everyone.  The disciples thought it was a joke.  Where would they possibly get enough money to feed thousands of people?

You know how the story ends…Jesus instructs the disciples to organize the people.  He takes the small lunch, blesses it, then has the disciples distribute the food to the thousands gathered.  Afterward, they collect twelve baskets of leftovers.

Lest you think these past events remained in the past, a couple of contemporary stories.

Seven years later, racial violence broke out across the country after four black men were beaten by a mob of whites in the Howard Beach section of Queens, New York.  One of the men, Michael Griffith, died when he tried to escape across a busy highway after being beaten with a baseball bat.  “In response to the killing, Rev. Al Sharpton led 1200 demonstrators through Howard Beach on December 27, 1986, as furious local whites screamed racial slurs and demanded that black protesters get out of their neighborhood.”  (Blood at the Root: A Racial Cleansing in America, by Patrick Phillips.)

After several death threats, Mr. Blackburn backed out of the march.  Another person, Dean Carter, took up the cause.  On January 17th, a bus filled with marchers, including civil rights icon, Hosea Williams, arrived and began marching.  Knowing a counter-protest had been planned, 80 local and state law enforcement officers had been called in.

Those 80 officers were no match for the 2500 angry counter-protesters who showed up.  The counter protest turned violent.  When it became clear that gun violence was likely, the deputies convinced Mr. Williams and the rest of the marchers to get back on the bus.  They drove to the end of the march and got out, but the damage had been done.  The march had failed.

After the march, Hosea Williams, a veteran of numerous civil rights marches that turned violent, including Selma in 1965, said, “I have never seen such hatred.  I have been in the civil rights movement for 30 years, and I’m telling you we’ve got a South Africa in the backyard of Atlanta…There were youngsters 10 and 12 years old screaming their lungs out, ‘Kill the …”

A second march the following week was successful.  350 law enforcement officers were called in along with 2,000 from the National Guard.  Successful though it was, the attempt the week before showed just how deep our nation’s racial wounds go.

But, hey.  That was 30 years ago, right?  Things are better now, right?  Oh, wait a minute.  Ferguson 2014.  Charleston 2015.  Charlottesville last year.  Many observers today say that current manifestations of racism aren’t new, people just have permission now to express their racism out in the open.  I suspect those observers are right.

Do you ever feel hopeless about working for racial justice?  Do you ever wonder, What’s the point?  Can anything we do as individuals or as a congregation really have any substantive impact on what Jim Wallis calls our country’s “original sin” of racism?  Are the wounds not too deep?  Is the hatred not too intricately woven into the very fabric of our nation?

As we gathered in the parking lot Wednesday morning, Jacque and I chatted.  We talked about what we were feeling as we embarked on our pilgrimage to Montgomery to visit the Legacy Museum and the National Memorial for Peace and Justice.  I told Jacque I was excited and scared.  In that beautifully direct way she has, Jacque asked me, “Why are you scared?”

As a white Southerner, descended from slave owners, I was afraid…I guess I was afraid of feeling shame.  My ancestors “owned” other human beings.  No doubt they lost a lot after the Civil War.  Might they have taken out their frustrations on their former slaves?  Might their once-legitimized racism have led them to commit racial violence after the war?  On the way to Montgomery, I wondered if people with my DNA might have perpetrated—or celebrated—any of the lynchings we’d see recorded at the Memorial.

I’m not going to lie.  Visiting the Memorial is tough.  So many pillars, so many names, so much cruelty, so much death…and for the tiniest of crimes—knocking on someone’s front door, looking another person in the eye, writing a note to a white person…or simply knowing someone who did one of those things.  Walking through the Memorial, among and beneath all the pillars, reading stories of people who had been lynched… It’s not overstating it to call the experience horrifying. 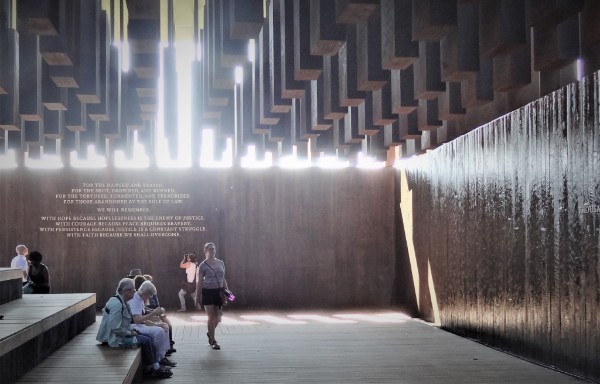 Seeing each pillar, reading the names, and learning the stories of the deaths of some of the people connected me with the past in a profound way.  Perhaps most helpful was seeing “my” pillars placed alongside so many others.  The vast array visually demonstrated that my ancestors weren’t the only racists in the country, which I think is where I’d gotten stuck.  Looking at row upon row of pillars, I realized that all of us—my slave-holding ancestors as well as all of us today—all of us still are caught in the insidious web of racism.

I left the Memorial harboring hope that it is within our power—together—to begin unraveling that tangled web.  But how do we do it?  How do we dismantle racism?

Have you ever wondered how thousands of people got fed with a child’s small lunch that day on the shore of the Sea of Galilee?  Or maybe, chalking it up to yet another fantastical, unbelievable Bible story, you’ve simply written the story off as fantasy.

Perhaps the most believable and, I would say, most hopeful interpretation of the story is that the child’s offer to share a small lunch inspired others to share food they, too, had brought with them.  In this interpretation, the real miracle isn’t food appearing out of thin air like on Star Trek.  The real miracle is a shift in people’s thinking from holding tightly to what was theirs to sharing what they had with others.  Everyone ate, not because of a magic trick, but because people decided to share.

In the work of justice, I wonder if someone is simply waiting for one of us to share our lunch, so they’ll know it’s okay to share theirs.  What if our giving freely of what we have here at FCUCC—a profound understanding of the radical inclusiveness of God’s love, an unshakeable conviction that racism is antithetical to Christian faith, a fierce hope that if we just keep working and sharing and working and sharing, the world as God hopes it to be not only is achievable, but is achievable in our lifetimes—what if all that’s needed to dismantle racism here in Buncombe County is simply for us here at First Congregational to offer what we have to give to the cause of racial justice?