Posted on September 29, 2019 by reallifepastor

About a week into my recovery from foot surgery, I had a sleepless night…one of those wide-awake-staring-at-the-ceiling-all-night-long nights.  I started off worrying about the world–climate change, the border crisis, hunger, war, racism, sexism, incivility…politicians…

When I got done worrying about the world, I started worrying about church.  That was the night I began to wonder if we, church and pastor, have been spinning our wheels a little.  This was before I remembered that times of wheel-spinning are a sign the congregation is ready to move forward, that wheel-spinning actually can be a good thing.

On that sleepless night, though, I panicked.  “What are we going to do?  With so many people going in so many different directions, how are we all going to get on the same page?  How do we live our passions for contemplation and social justice with equal intentionality?  How do we find more young people to come to church… especially when church is becoming increasingly irrelevant to so many people?  And, oh, my goodness.  What are we going to do about the crumbling plaster in the sanctuary?  How are we going to re-bind that plaster?  What will bind us together as a community?”  It was a very long night.

The next morning, I started reading a book.  A few pages in, I realized I had found a resource to guide us into a new vision.  Before I tell you about that book, though, I want to talk about something else, something Greta Thunberg said at the UN this week.

I’m always inspired by Greta, but one thing she said on Monday brought me up short.  To the adults of the world she said, “You look to us young people for hope.  How dare you!”

How dare we?  Isn’t that what woke adults are supposed to do–look to the next generation for hope?  What did she mean, how dare we?

As I wrestled with Greta’s words, an uncomfortable question hit me square in the heart.  I wonder if, in looking to young people for hope, we adults have abandoned our own.  I wonder if we wring our hands, confess our sins, then punt hopefulness to the next generation… perhaps even as a way to avoid nurturing hope in ourselves?

It’s easy to get overwhelmed by all that’s happening in the world–greed, violence, corruption, the climate crisis.  But when we throw up our hands, allow ourselves to sink into cynicism…when we tell the next generation we’ve messed up and the future is up to them, when we do that, we’re giving up the one thing, the only thing that can save us:  hope.  Our own hope.

Today’s story about Jeremiah is a lesson in hope.  Jeremiah was a prophet in 6th c. BCE Judah. That’s when Babylon invaded and conquered the country and took many Judahites back to Babylon in exile.  Jeremiah was among those who were held back in Jerusalem.

While under something like house arrest, Jeremiah has a vision. A distant relative named Hanamel will arrive and ask Jeremiah to purchase a plot of land belonging to the family.  Later, Hanamel, as predicted, shows up.  He says to Jeremiah:   “Buy my field at Anathoth in Benjamin. You have the right of redemption to purchase it as next of kin.  So why not purchase it?”

Why not purchase a piece of property in a country that’s just been conquered?  Let us count the ways.  The country is in shambles.  Many of its people have been exiled to another country.  Jeremiah himself is under arrest.  There’s no telling how long before the exiles return and Jeremiah is released.  Oh, there are many reasons not to purchase that property.

And yet…Jeremiah does.  He describes the purchase in minute detail. “So I bought the field in Anathoth from my cousin Hanamel, and weighed out the money—seventeen shekels of silver.  I signed the deed and sealed it, had it witnessed and then weighed out the money on a scale.  I took the copies of the deed of purchase—both the sealed copy containing the terms and conditions and the unsealed copy— and gave them to Baruch ben-Neriah ben-Mahseiah in the presence of my cousin Hanamel and of the witnesses who had signed the deed and all the people of Judah who happened to be in the court of the guardhouse.”

What we have here is the most detailed commercial transaction in all of Scripture.  Why is it so detailed?  Why do we detail commercial transactions in our own world?  Because we want to be clear about the transaction that’s taking place.  We want to make sure every i is dotted and every t is crossed.  We want there to be no confusion about what is happening…and we certainly don’t want someone to question the validity of the sale later on and sue us.

The same is true for Jeremiah.  He wants everyone to know–with certainty– that the exiles will return, that the people will regain sovereignty, that God still loves them.  “For this is what God says,” Jeremiah writes.  “Houses, fields and vineyards will once again be purchased in this land.”  In making this purchase, Jeremiah is staking his claim on hope.

And by that, I mean we are called to hope ourselves…no more pawning hope off on the next generation…no more cynicism…no more villifying individuals, even those in high offices… no more us-and-them… no more stewing in our own despondency because we think we’re powerless…

One of my seminary professors, Andy Lester, once contrasted hoping and wishing.  He said that wishing begins with the assumption that the object of the wish is unattainable… like, I wish I hadn’t gotten cancer.  Hoping, on the other hand, begins with the premise that the object of the hope is attainable.  “I hope this new treatment for my cancer works.  If it doesn’t, we’ll try the next treatment.”

Wishing is easy.  You can sit on the couch all day and wish to your heart’s content.  Hoping, on the other hand, takes work.  If you hope for something, you’re also committing to doing whatever you can to fulfill that hope.

Today’s sermon title comes from Emily Dickinson’s poem that begins, “Hope” is the thing with feathers – That perches in the soul – And sings the tune without the words – And never stops – at all.”  Here’s the last line:  “I’ve heard it in the chillest land – And on the strangest Sea – Yet – never – in Extremity, It asked a crumb – of me.”  Yeah.  I don’t agree with that last line.  I believe hope does ask something of us–and not just a crumb.  Wishing asks nothing of us…but hoping requires work….imaginative, creative, persistent, and loving work.

But what does the work of hoping look like?  Hi hope, hi hope, it’s off to work we go!  As both Dr. Lester’s description of hope and Jeremiah’s attention to the details of his land purchase suggest, the work of hope is grounded in reality, it’s attainable, it’s doable.

And I’ve got an idea about how to engage in that hopeful work.  The best means we have of moving forward, the idea and the vision that will hold us all together, the best way to nurture hope in ourselves, in our church, and in the world has been displayed on the wall for at least the whole time I’ve been here…right over there:  Just Peace. 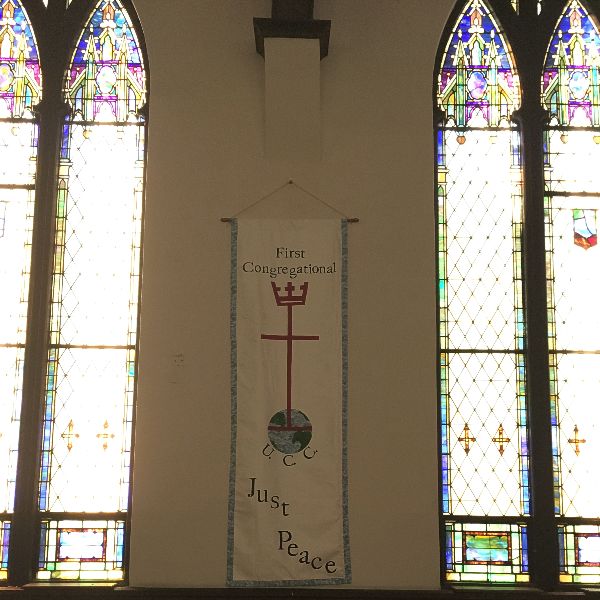 I had planned to roll out the Just Peace theme last week–September 21 is World Peace Day…but I realized we’d need to lay some groundwork before getting into it. That’s what we did last week. Then I thought I’d roll it all out this week.  But I realized it would be pointless to talk about working for peace if there’s no hope it’s going to work.  So, today, we’ve talked about hopefulness.  Greta’s words on Monday crystallized the need to reflect some on hopefulness.

So…beyond naming the theme of Just Peace, there’s not much more we can do today…unless you want to stay in worship another hour or so? 🙂  I do invite you to do some research about that banner.  Where did it come from?  Who made it?  Why is it there?  What does it mean?  The book I mentioned earlier–the one that gave me hope after my sleepless night?–is called “A Just Peace Church.”  You might like to check that out.  Or peruse the UCC website–ucc.org–to see what’s there on Just Peace.  Reacquainting ourselves with our Just Peace covenant is going to take some time.  We’ll take that time over the next few weeks.

Today, we’re going to stay focused on hope.  When you look at the world and see all that’s happening, what gives you hope?  What isn’t yet reality, but feels like it could be?  What feels attainable, possible, doable?

After some time for reflection, we’ll transition to our prayer time.  In addition to Joys and Concerns, I invite us also to name our hopes.  When you’ve named your hope, you may say “This is my hope.”  We’ll respond, “Your hope is now our hope.”  What a resource we have, this hope!  We can change this world with hope…if we dare!

In the name of our God, who creates us, redeems us, sustains us, and hopes for our wholeness.  Amen