So, here’s how the story could have gone.

As Jesus walked along, he saw someone who had been blind from birth.  The disciples asked Jesus, “Rabbi, was it this individual’s sin that caused the blindness, or that of the parents?”  “Neither,” answered Jesus, “It wasn’t because of anyone’s sin— not this person’s, nor the parents’.  Rather, it was to let God’s works shine forth in this person.”

With that, Jesus spat on the ground, made mud with his saliva and smeared the blind one’s eyes with the mud.  Then Jesus said, “Go, wash in the pool of Siloam.”  So the person went off to wash, and came back able to see.

That’s how the story could have gone…if the religious authorities hadn’t gotten involved.  But they did get involved.  Jesus had broken one of their laws by healing someone on the Sabbath.  In their eyes, that egregious sin couldn’t go unpunished.

Basically, the Pharisees try to make the newly-seeing man see like they do.  To see what they see.  When he refuses to see things their way, they kick him out.

The world we’re seeing now in this time of pandemic is completely different from the world we saw just two weeks ago, isn’t it?  “Unprecedented,” is a word I’m hearing a lot.  It’s tempting to continue seeing things as they’ve always been… planning for Holy Week and Easter services, just like we’ve always done them.  Planning for a return to normal after a week or two of disruption.  Waiting for the stock market to recover.

I don’t mean to frighten anyone by saying that.  I do think it’s the truth, though, based on everything we’re hearing from health professionals.

I’m convinced that our biggest challenge right now is opening ourselves to seeing reality in a new way.  In just two weeks, life as we have known it has completely changed.  In truth, the life we used to know is gone…The severe restrictions on what we can and can’t do, where we can and can’t go.  The harsh financial realities, whether it’s your dwindling stock portfolio or losing your job.  The simple pleasure of passing the peace with fellow church goers.

Physical touch.  I realize how much I’ve taken that for granted.

I suspect we’re a little numb, a little dazed, trying to figure out what the heck is going on.  As the new reality begins to settle in our minds and hearts, we’ll probably feel some grief.  Maybe loneliness.  Hopelessness.  And, yes.  Fear.

All those feelings are completely natural and to be expected.  Once we’ve felt them all, then what?  How do we move forward?  The healed one in today’s story moved forward by opening himself to a new reality.

The Pharisees couldn’t do it.  When the world changed, they couldn’t.  Hear me well.  I’m not here to beat up on the Pharisees.  It was their job to maintain their religious institution, an institution that had lasted a couple thousand years by that point.  They’d done their work well.

Fierce Grace is a documentary about Ram Dass, the New Age teacher who recently died.  Several years before he died, Ram Dass had a stroke.  Part of the documentary deals with his adjustments to post-stroke life.

After the stroke, Ram made peace with his new reality.  If he thought only of what he could no longer do, that brought him sadness and pain.  Making peace with the reality he actually inhabited calmed his spirit and made living much more enjoyable.

I think that’s where we are right now.  As long as we look at how things have been and how new protocols are keeping us from living the life we want to live, I suspect we’ll continue to be frustrated and sad, maybe even angry, or at least grumpy.

If, on the other hand, we can adjust our vision, if we can see the reality in which we’re actually living right now, I suspect we’ll be happier.  I also think we’ll be able to see more possibilities for moving forward in hopefulness.  And love.

Here’s another story.  This one’s told by New York Times columnist, Frank Bruni, about what a woman going blind began to see.

There are different responses to unexpected hardship, Bruni writes, and when Marion Sheppard began to go blind, she cycled through many of them.

She pitied herself and cried long and hard, because this wasn’t right — this wasn’t fair. Her hearing had been severely impaired since early childhood and she’d endured schoolyard teasing about that, so hadn’t she paid her dues? Done her time?  She raged. “Why me?”  She trembled. This was the end, wasn’t it? Not of life, but of independence.  Of freedom.

She spent months wrestling with those emotions, until she realized that they had pinned her in place. Time was marching on and she wasn’t moving at all. Her choice was clear: She could surrender to the darkness.  Or she could dance.

Shortly after her diagnosis, Marion began participating in events for visually-impaired people.  At one of those events, she was struck by how physically withdrawn they were, how still. “I said, ‘Oh, no,’” she recalled. “‘This is the way my life is going to be? Oh, no.’”

So, Marion began to dance.  An avid line dancer, Marion eventually began teaching a dance class at the Visions resource center she’d been frequenting since her diagnosis.  The director of Visions told her she could teach the class IF she could get a following. 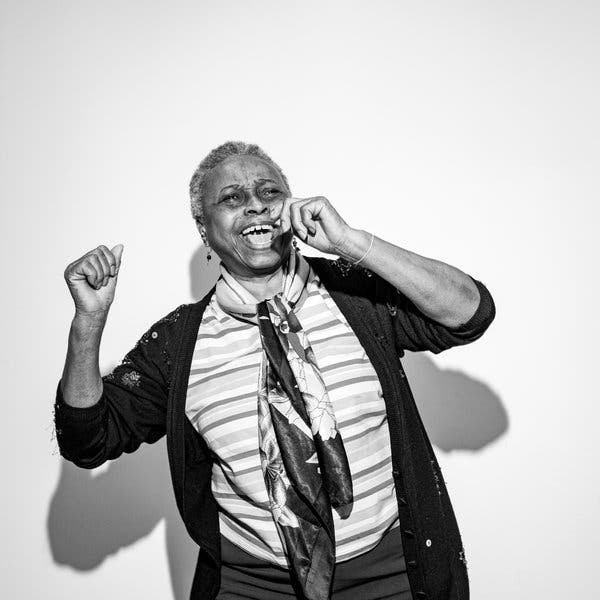 I’m sure we’re feeling lots of things right now.  Frustration, anger, fear, grief.  We’ve entered a whole new reality with no time to prepare for it–not physically, mentally, or emotionally.  Like Marion after her diagnosis, it’s completely understandable that we’re also cycling through a wide gamut of emotions.

Marion’s last name is Sheppard.  As we find our way in this new reality, we can let Marion’s example shepherd us.  Instead of pulling in close and withdrawing, we can make our peace with this new reality and get creative about how to live it with joy and meaning.

I know.  Part of our new reality IS about physically withdrawing.  All that means is that we’ve got to be creative about staying connected.  Marion Sheppard is an amazingly creative person.  When she couldn’t live the life she used to live, she found another way to live, a way replete with delight and meaning and joy.  And then she brought others along with her.

That’s our challenge right now.  In several of the notes I’ve sent out this week, I’ve said that our number one task as a community right now is staying connected.  It’s taking a tremendous amount of creativity to figure out how to do that…Zoom, Facebook, Youtube, Instagram…phone calls, texting, emailing…working together to provide lunches to the folks at Battery Park…

It’s not going to be easy.  But if we work at it, this new way of doing and being church, what joy, delight, and meaning might we find on the far side?  How might we grow closer as a community?  How many more people might we connect with via social media?  How much stronger might we be if we tend well to staying connected right now?

So, Church.  Here’s the biggest question facing us right now.  Will we surrender to the darkness?  Or will we dance?  If we follow Marion Sheppard, we’ll dance!