I woke up yesterday morning thinking about Paul’s shipwreck at the end of the book of Acts.  I’m not sure why.  Maybe because, like Paul and his companions on the ship in the Mediterranean, everything was going along fine…until it wasn’t.  After calling in at a couple of ports and changing ships once, they were hit by a ‘northeaster.’  Hurricane force winds pummeled the ship.  Everyone on board was prepared to die.

Of course, maybe this story came to mind because the ship was taking Paul to Rome.  Yeah.  Not a good idea right now.  Paul had been arrested in Jerusalem for defying Roman law.  Because he was a Roman citizen, they were transporting him to Rome for trial. 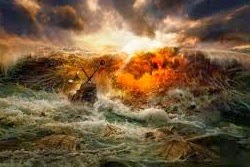 The description of Paul’s journey in Acts 27 is riveting.  It’s like you’re on the boat, feeling the impact of every wave.  When the ship eventually goes down, you go down with it.

Reading through Acts 27, I’ve been trying to figure out where we are in the narrative related to our coronavirus journey.  We’re definitely beyond the smooth sailing part.  The empty toilet paper aisles in the grocery stores attest to that.  And, as surreal as this new social distancing lifestyle is, I don’t think this ship is wrecked yet.  Thanks be to God!

But the going has gotten tougher, hasn’t it?  We’re definitely sailing into headwinds.  It’s difficult to tell whether the dark clouds gathering on the horizon are the kind that simply pass over, or the kind that bring waves that wreak havoc and destruction.  We’re in that disconcerting in-between time when we aren’t sure what’s going to happen, but we know that wherever the story takes us, things will be very different by the end of it.

Friday night on the PBS Newshour, David Brooks shared some of what he’s been reading about pandemics in the past.  “They’re not good for social trust,” he began.  “People go into them thinking ‘I’m going to be a good citizen for the people around me.’  But when the fear gets going, they stop seeing each other, they stop caring about each other, they stop volunteering.

“I’ve always wondered,” Brooks said, “why the 1918 Spanish Flu–that killed 675,000 Americans–left no trace on the national culture.  Reading about what it was like, people were ashamed of how they behaved, because they just looked after themselves.  That’s understandable, because fear is just a terrible thing.  We haven’t really been hit yet by the raw, gut-wrenching fear of seeing hospitals overwhelmed and stuff like that, but we will.  We need to take moral steps and social steps as well as we take health steps to mitigate that.”

That’s one of the wisest statements I’ve heard since this pandemic began…well, besides “wash your hands.”  “We need to take moral and social steps as well as health steps” during this pandemic.

Once safely ashore, we learned that the island was Malta.  The inhabitants were especially friendly.  They built a huge fire and bade us welcome, for it had started to rain and was cold.

Paul had collected an armful of firewood and was putting it onto the fire when a snake, escaping from the heat, fastened itself onto his hand.  (As if being arrested and shipwrecked weren’t enough.)  When the locals saw the snake hanging from his hand, they said to one another, “He must be a murderer.  For divine justice would not let him live, even though he escaped the sea.”

Paul, meanwhile, shook the snake into the fire with no ill effects.  They waited, expecting him to swell up and suddenly drop dead.  After a long wait, and unable to detect anything unusual happening, they changed their minds and decided he was a god.

Nearby there were estates belonging to Publius, the chief official of the island.  He welcomed us with open arms and entertained us cordially for three days.  It so happened that Publius’ father was ill, suffering from dysentery and a fever. Paul went in to see him, and after praying, healed him by the laying on of hands.  Once this happened, others suffering from illnesses came and were healed.  They honored us with many gifts.  When it came time to sail, they supplied the provisions.

This is just the best story ever.  Prisoners and guards, people from vastly different cultures…everyone just meeting each other where they were.  Meeting each other as human beings.  Doing whatever they could to help each other.

After three months, Paul and the others left on a new ship.  Eventually, after his trial, Paul was executed…so the larger story doesn’t have a happy ending.  But for a brief time on the island of Malta, people cared for each other.  Despite the fact that they all had significant struggles, they helped each other.  They offered each other their unique gifts and, for a season, eased each others’ journeys.

The times we’re in are fraught.  The economic toll the pandemic is taking already is being felt.  Social distancing certainly will bring challenges of its own.  Yet, even in fraught times, there is hope.  Even in fraught times on the island of Malta, Paul, his companions, and the islanders lived in hope.

Julian of Norwich lived through fraught times.  Several of them.  When she was 6 years old–in 1342–the first wave of the plague known as the Black Death tore through her town of 10,000.  Julian survived, but within a year, three quarters of the town’s population had died.  Thirteen years later, the plague came again…then again in 1368.

In 1372, Julian herself became ill with a fatal disease.  As the disease ran its course, Julian had several visions.  After experiencing one of those visions, she began to get better.

After recovering, Julian chose the life of an Anchoress.  She lived in a cell attached to St. Julian’s Church in Norwich.  Through a small window, she would dispense wisdom to all who came to see her.  She eventually wrote a book about her visions, Showings.  By many accounts, it’s one of the first books written in English.  That it was composed by a woman is even more remarkable.

In the name of our God, who creates us redeems us, sustains us, and hopes for our wholeness.  Amen.