Posted on June 9, 2019 by reallifepastor

I spent Easter night with some friends.  Of course, the big news that day was the pastor tilting the Christ candle during Children’s Time and a little oil oozing out.  At which point, I made the joke that if the candle lit like usual, we’d have Easter.  If the oil caught on fire, then Pentecost would come a little early this year.

One of my friends, who didn’t grow up in the Christian tradition, said, “I don’t get it.  What is Pentecost?”  So, I explained it…the people gathering 50 days after Jesus’ resurrection.  God’s spirit blowing in.  Little flames of fire alighting on each person’s head….  The more I explained, the more fantastic it sounded.  Finally, I said, “So…fire is a symbol of Pentecost.”  “Ahh,” he said.  I don’t think he’ll be converting any time soon.  🙂 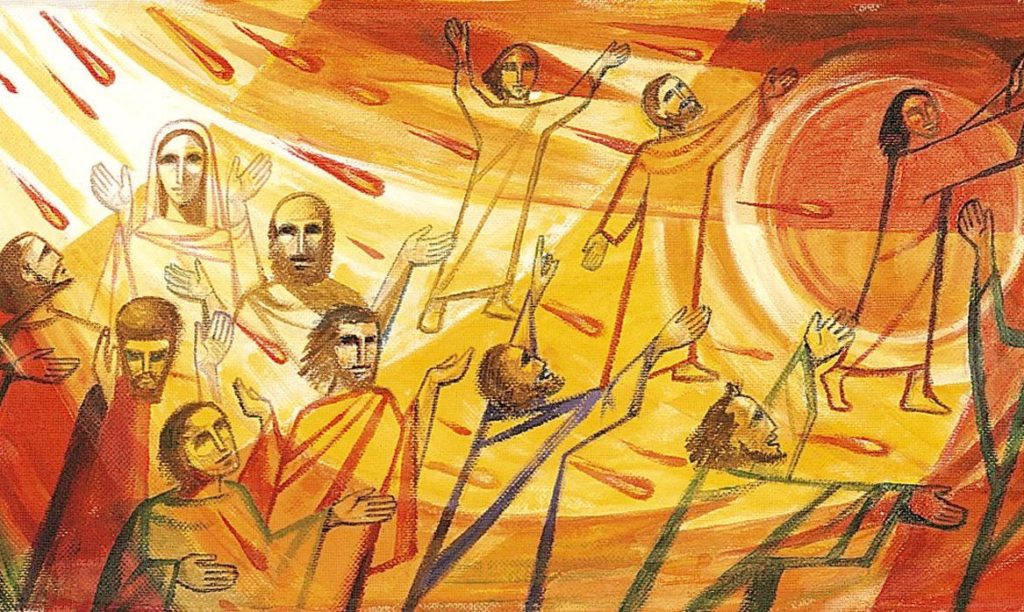 It is a fantastic story, isn’t it?  No wonder when the wind and fire came, when everyone could understand each other despite speaking different languages…no wonder when all those things happened, even the faithful asked:  “What does this mean?”

What does Pentecost mean?  What does this old story of Pentecost mean to us followers of Jesus nearly 2,000 years later?  You saw what happened with even the threat of fire on Easter.  People gasped, the pastor said, um, an un-pastorly word…  And what about that day when a strong gust of wind came up and shook our windows?  More gasping, right?

Unexpected wind and fire can be disconcerting.  They also can be energizing.  On Easter, I set that candle upright right quick!  And I think we got a few more donations for the repair of the windows the day the wind blew.  🙂  (Donations are still be received!)

Wind and fire.  What do they mean?  And why has the church seized on these elements to represent its birth…and re-birth?

Perhaps it’s about power.  We’ve seen the catastrophic damage done by tornadoes this Spring…and from hurricanes in the past couple of years.  It will take some communities generations to recover, if they ever recover at all.  And the wildfires in California–and wildfires here a few years ago–remind us of the devastation of uncontrolled burns.

Wind and fire are powerful.  Unchecked, they can over-power.  Harnessed, they can do tremendous good…like controlled burns in forests that create space for new life.

Or like what happened in the early 2000s in Malawi.  Severe flooding, followed by an even more severe dry season, and exacerbated by unrestrained logging led to near-famine conditions.  Farmers despaired when crops couldn’t grow, or—when they did grow—were underpriced or stolen.  The Kamkwamba family worked their farm hard.  Proceeds from their farming had put their daughter through school.  They were proud to send their 13 year old son, William, to school, as well.

But the rains, then the drought, the low prices, and the theft–reduced the family to subsistence living.  In one poignant scene in the movie that tells the story, “The Boy Who Harnessed the Wind,” the father tells the family they must now eat only one meal a day.  He asks each member which meal it should be.

Even after he is expelled from school because his family is unable to pay tuition, William finds a way to continue visiting the school’s library.  He keeps going to the library because he’s had an idea.  Seeing that the light on his teacher’s bike shines when the bike is pedaled, he asks his teacher how it works.  His teacher tells him it’s a dynamo, a device that uses magnets and electricity.  William’s idea is this–to create a dynamo that will supply electricity to his village.

In the library, he finds a book that details the process for making windmills, devices that harness wind to create electricity.  From drawings and explanations in the book, William’s plan begins to form.

His first stop is the junkyard.  He collects old PVC pipes, motors, and electrical wires.  He finds an old fan.  He obtains the dynamo from his teacher’s bike light.  The last item he needs is his father’s bike, the family’s only means of transportation.  His father resists sacrificing his precious bike, even when William assures him that he can build a windmill that will run the water pump that will make it possible to plant crops year ‘round, even in the dry season.  Eventually, William’s father relinquishes his bike.

The whole village works to build the windmill, cutting down trees, creating an irrigation system.  Once the windmill is completed and the fan begins to turn, the villagers leave the machine to do its work charging the battery that eventually will power the pump.

When the villagers gather again, they stare expectantly at the water hose.  When the pumped water begins sluicing down the waterway, their joy explodes.  The crops grow, the village is saved.  William goes back to school and eventually graduates from Dartmouth College with a degree in engineering.

On the face of it, this might not be the most obvious of Pentecost stories.  But then again, “harnessing the wind” is pretty much what Pentecost is all about, isn’t it?  God’s Spirit blows in unexpectedly, which is wonderful and energizing…but if we don’t “harness” that wind energy, if we don’t convert that spirit energy into a usable form, it won’t be able to sustain us.

If the church is to grow and thrive, it’s got to have a steady source of energy.  And we have to have a means of accessing that energy on a consistent basis.  So, how will we harness the wind of Pentecost here at FCUCC?

Let’s look again at how William harnessed the wind in his village.  First, he was deeply immersed in the life circumstances of his family and the rest of his village.  He saw how hard everyone worked and how little they received from that work.  He watched and worried as his loved ones slowly starved.

William also knew how his mind worked.  He understood machines and electricity.  He knew how to fix things.  He had confidence in his engineering mind, even when those around him lacked that confidence.

William also knew how to assemble found objects into workable machines.  Hence, his frequent trips to the junkyard.  William could see the dire circumstances facing his family and village, he trusted his ideas about how to solve their problems, and he knew how to use the objects at hand to build the machine that would solve their problems.

What I’m trying to say is, William used what he had to act those in his world into wellbeing.  And he did it by harnessing the wind.

Our summer theme officially begins today.  “Using what we have to act the world into wellbeing.”  The question for us is similar to the question that guided William’s work with the windmill.  “What resources do we have?  How might we use those resources to act the world into wellbeing?”  How might we use the gifts of the Spirit in this community for the common good?

There’s a brief scene in “The Boy Who Harnessed the Wind.”  William has just collected several items from the junkyard for his windmill project.  You can almost see his mind working as he surveys the items arrayed in front of him, imagining how each part might fit into the overall project…imagining how a windmill will improve drastically the lives of his family and fellow villagers.

That’s the scene we’ll be living this summer.  As we discern where God is leading us as a church, as we imagine together how we might use the gifts of the Spirit to this community for the common good, the first step will be to assess what those gifts are.

Each week, we’ll look at a different set of resources to help us in our work of acting the world into wellbeing.  You’ve got a copy of the resources we’ll be looking at each week.  Of course, this list isn’t exhaustive…but it will at least give us a place to start as we seek to identify the gifts and resources within our community.

When I came here 16 months ago, I was a bit giddy.  Such euphoria over being called to serve with this vibrant congregation!  Sixteen months in?  I confess that I’m even giddier (if that’s a word).  Y’all!  This is an amazing congregation!  Seeing new life around the place the past couple of weeks–landscaping out front and the window work….Have you seen the window work?  Now you can tell from the outside that our church has stained glass windows!  With the plastic covering the windows before, you couldn’t tell.